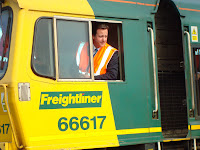 Thank God I didn't get the train to Crewe. The whole line was shut for much of the day. Anyway, I arrived mid afternoon, just ahead of David Cameron who made his third visit to the constituency today. The number of volunteers in the Campaign Centre has to be seen to be believed. I caught a few words with the candidate, Edward Timpson who seems to be bearing up well under the strain. I wouldn't want to be a by election candidate if you paid me.

I lost count of the Tory MPs who had managed to get to the Campaign Centre, despite the train difficulties. David Cameron paid a visit to the nearby Freightliner terminal where he was besieged by journalists, including the redoubtable Michael Crick. If the press presence is anything to go by, this by-election has certainly captured the imagination, although I am not sure if the people of Crewe are as fascinated as the press. Admittedly I haven't been out and about much yet, but so far I haven't seen a single poster from any party.

Anyway, I am now about to go and knock on a few doors and sniff the electoral air. More later from my luxury accomdation in the disabled suite of the Premier Inn Hotel in Woolaston. It's a really nice place this, and a Beefeater next door. What more could one want in life?

PS At 10am tomorrow I shall be interviewing Miss Great Britain for Telegraph TV. Yes, I know she's a bit wasted on me, but if you have any line of questioning you'd like to suggest, please feel free...
Posted by Iain Dale at 6:18 pm

"Yes, I know she's a bit wasted on me, but if you have any line of questioning you'd like to suggest, please feel free..."

Oh, Iain! That was funny!

Was in the Premier Inn at the weekend Ian! My only complaint is that the advertised "all you can eat" breakfast wasn't all you can eat. Where's Lionel Hutz when you need him?

Iain - why the disabled suite?

Can you ask Miss England who is cuter - Cameron or Brown, and if she says 'Cameron' leak it to the media. If she says Brown, shoot her!

I did a vote match thing for this election. I got:

That's exactly what I would have guessed, every point right.

It just goes to show that it can happen to the best of us.

How is she Miss Great Britain when she's from Northern Ireland?

At the risk of revealing myself to be a complete saddo... any idea what Mr. Cameron said on the Freightliner visit? The passenger side of the rail industry gets all the attention, but rail freight's probably going to be a non-trivial issue for any future Conservative government, given the continuing gridlock on the roads.

Ask her if she believes England should have its own parliament.

Ask her what her view is on the West Lothian question. As a Miss England, she's bound to have one.

So Dave got to drive a train. I hope 666 is not significant.

Why are you taking the mick out of your accomodation?

Not so much a question, as a warning.

A previous beauty pageant winner ended up married to Bruce Forsyth and was watching PMQs with him this week.

So she should be careful that in 20 yrs she isn't married to Vernon Kay who is trying to nick some material from Prime Minister Purnell...

[p.s. I was going to put in a remark about being careful if you are eating chocolate in the hotel room, but best not as I don't want to cause inadvertent offence..]

Isn't that Woolstanwood? not Woolaston which I think is in Glos.

You may be confusing it with Willaston, which lies midway between Crewe and Nantwich, but there's no Premier Inn there.

If you go canvasing around Nantwich ask people if they were born within the confines of Nantwich, as they are known locally as 'Dabbers' (Not so many around now as most are born at Leighton in Crewe) - but Nantwich did have it's own Hospital some time back.

Also some people in Nantwich are paid to live there! - there's a trust known as Beam Heath, which pays out to some residents depending on where they live - maybe as much as £30 a year.

2. does she mind having the same initials as the Prime Minister?

Is she offering to cure you?

Can you get her mobile for me - to be honest there probably won't be any future in it for her but at least she gets to poddle about in the Aston for a while.

I know a good question for her.

Aks her , what will she do for ugly people. After all it is Crewe Urghh.

LOL. Only joking Crewe people can be good looking.

Yes Iain, that's one of life's mysteries. Just why would she be wasted on you?

The disabled suite in Premier Inns are left unsold until the last moment (unless needed by a disabled person) so given the huge interest in Crewe at moment its not surprising that the last man in gets it.

Well, you and Miss GB have so much in common - enjoy foreign travel, like fluffy animals, are impressed by intelligent banter (even if it gets a bit complicated). Don't ask her about a return to the Gold Standard. Women and Gays, Know your limits.

Q: If elected, will you take the whip? Or wield it?

Q: Have you ever "changed trains" in Crewe?

Q: In your own experience, are honourable members always upstanding?

Q: What is a "Nantwich" and is it suitable for children?

Q: Have you ever been in a pillow fight and/or jello wrestling bout with any/all of the following:
1) ppc
2) privy councillor
3) lord mayor
4) London mayor

Seriously, all the best to the intrepid candidate, and thanks to her for doing her bit to enlivening this festival of democracy!

Which does she prefer: small furry animals or world peace?

Miss GB is with us on one thing and that's about Labour's electioneering tactics. I'd suggest teasing that out of her because it plays well for those candidates that are behaving somewhat better than the Dunwoody II Stormtroopers.

"Only joking Crewe people can be good looking."

Yes, but the very few girls who have any kind of good looks are uneducated chavs who can't string a sentence together, and have STDs. And probably a batch of children too.

And Nantwich is just as bad, in its different way.

Whilst not wishing to be like a paranoid yankee......
You don't possibly think that the railway problems where influenced by a little dirty thought turning trick......
Or possibly a bit of the old fashioned unionist intervention....

Have a nice time in C&N. Lets hope for an ursine surprise.

Second attempt at this question.
Why not leave the disabled room for someone who needs it? If in fact you do need this facility, then I apologise.

Thinking ahead to Henley, I can heartily recommend this place to both you & Miss GB:
http://www.telegraph.co.uk/travel/hubs/ukhotelreviews/1958360/Milsoms-Hotel,-Henley-on-Thames-Room-service.html

ask her if she thinks there ought to be a swimsuit round...

I lost all respect for Cameron after he came out as an admirer of the cloven hoofed huns.

Why are there tons of volunteers that "need to be seen to be believed" in the effing Campaign HQ?

Is this like Southall, where all the CF mob stand around gormlessly trying to look important, because they're far far too important to shove leaflets through front doors?

If you'd seen a gang of volunteers on some doorsteps I'd have been happy.

you might want to be a little less sniffy about these sort of places Iain. A lot of VOTERS cant afford to stay anywhere else. Sorry they couldnt find a spot for you at the local 5 star. No doubt all will change once you are in power and the local peasantry will turf their children out of their beds to give a visiting Tory and bed for the night.

Where do you live mate?

I have stayed in the disabled room at hotels on a number of occasions. Unfortunately they do not confer the automatic right to park one's Audi in the disabled space. You do however get excellent "megadump" handles in the bathroom which you should use to your full advantage.

I do however always try to help the hotel by pulling the various red cords about the room. If they are working, no alarms sound, but shortly after pulling them hotel reception should phone you to see if you are OK. If they don't, either the emergency cord mechanism or the staff response time is poor and you should report it.

Anonymous - How on earth was that being 'sniffy'! I said 'It's a really nice place this' and I meant it. It was! The reason I ws in a disabled room, was that it was the last room left in the hotel. They always keep them back. I can highly recommend the Premier Inn to anyone who goes to Crewe over the next few days.

My only complaint is that the baked beans at breakfast were a bit tepid.

a belated apology Iain. I mistook enthusiasm for sarcasm. I am a big fan of the not dissimilar Holiday Inn chain and I have to say that their breakfast is not up to standard either but better than what one usually gets in European hotels.

Not any more, darling. Keep up.