The Delights of Eurovision 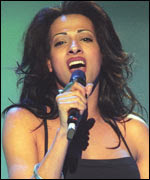 Am liking the Finnish Eurovision entry. Nothing like a bit of Heavy Metal to get the thing going. The songs so far have been awful. The UK entry was truly excrebale. It was ten years ago tonight that I actually attended the Eurovision Song Contest when it was held in Birmingham. I was sitting next to Stephen Twigg, who nearly exploded when the Israeli transsexual singer, Dana International (pic), won. Hilarious.

I was going to do a CoverItLive blog tonight on this, but I forgot I am going to the BBC in a minute to do the late night paper review. I suppose I shall have to listen to it on Radio 2 on the way seeing as Five Live is covering boxing.
Posted by Iain Dale at 8:38 pm

I'm also live blogging at the link below.

Apart from Terry Wogan`s fantastically ascerbic commentary( the only reason I watch) it was about as interesting as a Gordon Brown Speech!!!!

Theres a lesson in there somewhere.

The UK entry was one of the better ones I thought. A good piece of funky pop. Far better than most of the sub-par techno, and thousands of times better than the Spanish entry...

Oh, please, no more of this corrupt Euro twitter contest. It has to be the most boring thing on earth. Anyway, its European trash.

As someone said on HYS, can't we just resurrect the Horse Of The Year Show? That was fascinating in comparison to EST.

Either way, we have been robbed.

Dima Bilan won because he is a big pop star in Russia/Eastern Europe, not because that particular song was especially good. Similar to if the UK entered Robbie Williams or Leona Lewis or someone like that who might gain points on their name, however bad the song was.

Andy the Binman was crap, so no tears for the UK. We deserved to do badly (though perhaps not last) - 15th or so might have been fair.

Anyway, Russia it is next year. Putin will no doubt be delighted to show off the continued resurgance of the Great Bear.

The BBC pays for 40% of the costs of Eurovision. Why? Over 40 Countries take part.

Time has come for the western Countries to wave goodbye to the eastern european lot.

What Eurovision should warn us about is that if we allow more and more eastern european countries into the EU, we will be picking up the bill whilst they dictate to us.

Eurovision has nothing to do with music - that's the vision.

I just read the comment that the BBC pays for 40% of Eurovision - is that correct in which case we should pull out immediately.

Found this about contributions - the UK pays 10%.

They don't actually pay the most - but they pay a larger contribution than other countries. Each of the big 4 pays around 10% of the total costs - in total 40% - the other 60 % is split between the other countries.

The reason for this is power. The 'founding' tv companies were not keen to give up a strong control and say in how the show developed because for them it is about creating an evening's entertainment for their respective countries.

So it was agreed that in exchange for a larger contribution, they could have more of a control over production and on top of that always have an instant free ticket to the final.

First time I have watched it since the days of Abba.
I still take a keen interest in music and was ,in the day, a bit of a groover so I was wondering if there would be anything of any quality . There was not . I found it a mystifying melange of pantomime and dimly apprehended pop none of which could expect to get a hearing in the sophisticated US and UK market place .
What a clear demonstration that we have very little in common with this silly little foreigners with their childish entertainment. How amazing that they have about 80 % as much of a say in the running of our own country as we do .The BBC having bought the European Cup is desperately asking people to watch it and support Spain or France or someone ( Who will you support?…..).

How can they mistake a coincidence of proximity with the loyalites between us and our real friends in New Zealand , Australia , America and so on and so on .

I can't see that it would be worth the BBC continuing to cover it without Wogan doing the commentary because the audience figures will drop dramatically.

If it is true that we pay much of the running costs then that must stop.

I don't blame the East Europeans voting for each other's entries when they are familiar with the performers, language and style but many Western entries have become a joke because no one takes it seriously.

I can't see why everyone keeps praising this year's UK entry.

Since the UK taxpayer forks out for 40% of the cost of this farce, then maybe we should be asking some questions. Ok, it's a huge laugh - how could anyone actually take it seriously? Ridiculous.

Let's face it:
1) musically, eurovision is read
2) with political block voting, no western european nation stands a change. Russia could win thanks to votes from countries with russian minorities (baltic countries, ukraine, &c.).

The lesson: if you really want to win, split up the UK into at least eight countries.

"and these are the results of the essex vote..."

Now is the time to say Goodbye ...

Dana International was the only good one since Abba.

Scrap Eurovision. And all other euro-crap.

Don't whinge, just turn the damned telly OFF. If enough people do it, then the BBC will struggle to justify a large expense for piddling viewing figures. I predict that if Sir Terry of the Wogan gives up the commentator's job figures will slump anyway, unless he was replaced by Ken Dodd or Jim Davidson!

The ESC is systematic of the way way Europe is fragmented and should remind us of the way it works. The endless back scratching between the various fractions at least presents scores of respectablity in its overall position. In the UK's case there is nothing but knives out for our back. Given the political climate of the UK at the moment, when there's nothing left for our European cousins, they will return to their homeland and seek favours with their neighbours. In ESC terms they have already done this, where as Britian is currently running at Katrina and the Waves mode. Our relationship with Europe isn't what this government this it is, indeed never was, but hayho, we'll find that out in the near future. Its time both the BBC and the UK withdraw its support, or should I say funds, afterall like the proverbial gold digger, its the money their after, you don't think that they love us do you....

If Terry Wogan is on the verge of giving up, then it does say something very serious about the Eurovision project.

Can you imagine American Idol voting going by 'state lines' rather than who is the sexiest, flounciest and tartiest singer with an acceptable voice ??

Mind you, Miss Ukraine did make it to the runner up spot - ding dong..

mb - I take your point, but without Wogan they might draft in Ken Bruce who used an admirably laconic style to provide a wry and amusing commentary on Radio 2.

I'm afraid I couldn't bring myself to sit down and watch the whole thing, but hearing his 'dearie me' approach to the whole thing especially the 'presenters' was rather amusing.

The idea that Europe could be 'one country' after seeing the range of different offerings from Euroland would be laughable if people didn't take that 'vision' so seriously.

The only good song as far as I was concerned was from Israel - written by Dana International so she obviously isn't just a pretty face. Otherwise agree with all the comments. It was a dismal jaded show -time to swith off Eurovision.

Not sure if Ken Bruce would want the job, he knows that Wogan is very difficult to follow.

Now Wogan is going to be available, can we enter him singing Floral Dance next year before withdrawing from the contest.

Interesting blog about Eurovision and race at www.floating-voter.blogspot.com

You know you've 'arrived' when you can "forget" that you're going to the BBC to review the papers!

Try the Israeli entry - much nicer!