It woz the News of the World Wot Done it 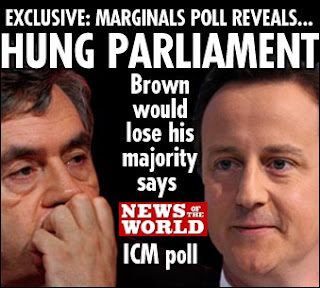 This is why Gordon Brown became a big girl's blouse. The News of the World poll, just published on their website, shows that Labour would lose 50 marginal seats to the Conservatives, enough to rob them of their majority. The NOTW story says...

The poll gives the Conservatives a 6% lead over Labour in the marginals (44% versus 38%) – a substantially higher figure than recent national polls, which showed the Tories level or close behind. That result would give Labour approximately 306 seats, with the Conservatives behind on 246. It is not possible to predict how the other parties would stand. The poll confirms that turn-out would be a problem for Labour. When asked, 59% of Labour voters said they were certain to vote, compared to 71% of Conservatives.

Thanks for the credit!

Leaving Brown reliant on his Scottish and Welsh troops to legislate for England.

His name from now on should be:

Gordon "I bottled it" Brown.

So Broon, aswell as being an unelected, anti-English communist Scot with no mandate to rule England, he is now also officially a coward!.

I live in Gillingham, very marginal seat with approx 200 Labour majority. At 16.30 this aftern I was phoned by a Labour party worker by the name of James and asked 3 very specific questions.

1. Which party do you most closely identify with? Answer - Conservative

2. How do you intend to vote in the next General Election? Answer - That depends on whether one is called doesn't it?
Sheepish response "Yes I suppose so"

They are VERY worried about how marginal their support is in the marginals!

These 'marginals polls' were tried in the elections of the 1980s and were very unreliable. The problem being that you can't actually be certain where the marginals are until after the election (eg Hastings and Rye in 1997).

I wouldn't put such a great emphasis on this. The likelihood to vote statistic is interesting but this poll was taken during a Conservative conference bounce and we all know how quickly they fade.

Sod..the bad news is that we still have two more years (maybe) of Brown as PM...shame he didn't go for it...

Oh Mr Referdumdum, with your excoriating wit you are spoiling us.

But Iain, what would have happened in a hung Parliament?

Surely THE news is about England beating Australia not Bottler Brown.

I'm really annoyed that El Gordo has bottled it. I had a perfect drinking game designed. I was looking forward to trying out.

This is the last time I will reply to you. Your wit is far too great for me.