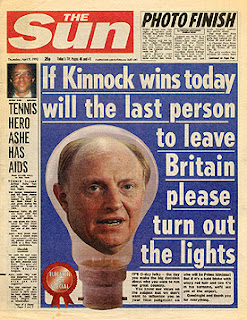 Remember this newspaper front page from 9 April 1992. Well, the British people in their wisdom certainly heeded it. This evening I was reading PoliticalBetting.com and came across a post from someone called Roger who had transcribed an exchange from the Alastair Campbell Diaries between the Kinnock's and Campbell. I remember reading this and thinking that it proved, as if we needed any reminding, that the man was unfit to lead this country. Kinnock was ranting about how Tony Blair had praised Margaret Thatcher. Read and be horrified...

NK. (’Losing it’) “Margaret Thatcher ‘Not too bad. You have to admire her
determination and leadership’….That’s what the leader said”

NK. “It’s not just Africa it’s Asia….any continent you mention (Brown) refused to commit to .07 of GDP to overseas aid…..”

Gleny’s K. “The problem is there are large parts of the party that feel alienated by TB. The message is that everything that went before was hopeless….”

Gleny’s K. “In Wales they think he only cares about Essex man…”

NK.(returning after storming out) “How can (Blair) address education policy when he sent his own son to the SS Waffen Academy? He’s sold out before he’s even got there……”

NK. “The bankers and the stockbrokers have got us by the b*lls…and that’s before you took your 30 pieces of silver…..”

AC. “What’s that supposed to mean?”

AC. So that’s what this is about?

NK. “You imagine what it’s like having your head stuck in a fuc*ing light bulb and then tell me what it’s like seeing him jet half way round the world to grease him up. You’ll get his support and a few racist basta*ds and then you’ll lose it again the moment you’re in trouble…….”

And to think, he was within 21 seats of having his finger on the nuclear button...
Posted by Iain Dale at 10:52 pm

It's barely comprehensible, that's what it is. What a very odd man.

Speaking of killing people, nearly half the population of Iraq are officially starving, and about 70,000 civilians have been killed as a result of the intervention.

A great Blair legacy of death and moral decay, mediated by Alistair Campbell.

(weasel's words is back.
http://wrinkledweasels.blogspot.com/)

WW - beat me to it on the death toll under Blair/Brown - and it's getting worse by the day.

Nice to know that Blair was worried about our host who is an "Essex boy".

I'll have a look at weasel's words - nice advert!

So Labour politicans don't like it when people 'stick their head in a lightbulb'.

Hmmm, I might invest in some photoshop software and make some funny pictures.

Don't understand a word the boyo says. Too much Brains SA?

Mind you, don't believe a word AC says either.

I'm sure even Tories rant in provate. it strikes me that Kinnock had what he thought was a private rant and Campbell prited it. Nice man.

Iain, what's your point? NK coulde get angry... AND?

Use what few neurons you have for Chrissake Dale.

If Major's Tories could have resisted the temptation in 1992 to 'grab a granny' and commit electoral fraud on a scale that puts a multi cultural metropolis like Brum to shame then it would have been Kinnockio who would have had the pleasure of watching sterling crash out of the ERM wouldn't it?

The heirs of Thatcher would then have had a perfect opportunity to sort out Europhiliacs like Heseltine and Clarke before forcing a mid term election.

And they'd still be in office today - without any help from granny.

I agree 100% with Norfolk Blogger. It's Campbell who looks shoddy (shoddier, if possible). As to what MrK was saying ... garbage about Mrs T, but almost touching to read how he and his missus would rave about "Africa .... Asia ... Anywhere" like the Webbs ... and his view of Murdoch is probably more printable than my own. You've managed to find something about Neil Kinnock that makes me think quite fondly of him Mr Dale, which is quite a feat.

I too feel that Campbell is the one who is shown up in an unsavoury light in this posting.
Kinnock was certainly right in everything he said about TB.
I think Kinnock might have been a better prime minister than you give him credit for Iain.

Well I don't know what Kinnock is upset about. He and his (quite) photogenic wife have done remarkably well for themselves since those days.

Their weakness (the pair of them) has always been their overweening sense of their importance - and their perception of their personal contribution to the betterment of mankind. They have actually achieved very little apart from a reasonably attractive and luxurious lifestyle.

I view Blair's succession as a simple internal putsch after Kinnock's poor performances at the polls and in Parliament. Hardly surprising that the Kinnocks resent Blair and his acolytes.

What will Cameron's head be put inside when the already hostile tabloids decide to make the overdue coup de grace?

On another point, The Independent called Hazel Blears a Botox Princess - can anyone confirm? I always hoped she'd get botulism, but not quite like this.

What an odd yardstick to choose.

He would no more have had his finger on the nuclear button than Gordon Brown has now - or any other British PM before him for that matter.

Any imagined freedom to use our so-called 'Independent' nuclear capability independent of a US green light is just that - imagined. The US has a veto - in all probability extending to a hard-wired veto too; as in the ability to frustrate a successful targeted launch in defiance of their wishes.

Otherwise - agreed; Kinnochio is a corrupt, foul-mouthed, pompous, self-righteous thicko who's done rather well for himself on the back of his tribal loyalties

Has anyone a transcript (better still, a recording) of Kinnock being interviewed in Coventry(?) in 1992.

It was after Sheffield, and Kinnock was recovering. He basically forgot what he was saying a burbled on for ages.

Although widely shown at the time it seems to have been forgotten.

In some ways it would have been better for a fool like Kinnock to have won, screwed things up and then lost again than the political genius that is Blair/Brown/Campbell.

Iain you are being a bit unfair to Neil. He was p***ed off, who wouldn't be in that situation - but he shouldn't have been PM either, but not because he is capable of getting angry - he has a redhead's temper, and I know whereof I speak - because, as one commenting here says, of his tribalism. That's why Tony was such a great PM, because he wasn't a tribalist.

One term of Kinnock would have meant we would never have had another Labour government of this nation.

I rather regret now that he didn't get elected in 1992, doubt he and his other half would be so nicely positioned in the EU trough either given that mess he'd have made of being PM.

Two things, one it's Campbell's version of events, and two was a Tory win in 1992 a good thing?

I agree with a few others that while Kinnock might not emerge from that anecdote in any great light it's hardly the definitive proof of his unsuitability for office.

As an anecdote it speaks to three distinct issues - New Labour's duplicity over the Murdoch press, Campbell's lack of discretion and then lastly perhaps the volatility of Kinnock's temper.

Strange that the latter is the one that raises you ire Iain..?

Diplomatically, it is true, the situation that would cause the UK to use our independent deterrent without agreement from the USA is highly unlikely.
But, it is entirely untrue (and repeated stated) to say that the USA has a veto on its deployment. The decision is *entirely* within the British chain of command, as repeatedly stated by Thatcher, Blair and Brown.

Is this article telling us that we were "saved" from the Kinnocks to be lumbered with the Blairs. Some saviour?

I like the 'Catholics are Nazis' line though - religious tolerance at its best.

Norfolk blogger - pedantry back at you... A majority of 21 would need a turnaround of 12 seats not 21 if they went Labour to Conservative, it would be more complicated by smaller parties. Your point about having to get more seats because of the smaller parties is interesting as I believe that at that point a coalition of Labour and SNP could have been formed, maybe with PC as well.

...And to think nearly every thread on this blog will have a dozen blue noses whining about press bias. Kinnock suffered the worse press bias in UK political history.

Do you think the public are going to put a wet floppy haired eton husky hugger in No 10.

Kinnock may or may not have been a good PM, that is something we will never know.. Get over it....The Labour Party has !!!!!. Your current mire is STILL caused by YOUR inability to get over Thatchers demise.

Poor old Iain - still don't get it do you? 1992 was the election to lose but poor old Major couldn't even manage that.

Had Labour won then with a tiny majority they would have suffered a crushing defeat in about 1996. The Tories would now be enjoying their twelfth year in government and you would be an MP possibly with a real job instead of a frustrated blogger. Better luck next lifetime...

Jim, exclamation marks are a lot like cats. One is fine, two is excessive and more than that is a clear sign of a diseased mind.

Trident II depends upon the US GPS system for its MIRV accuracy and also for in flight corrections to its primary inertial guidance system. The US can switch off - or spoil/scramble - GPS transmissions at the flick of a switch. I have no doubt that is exactly what they would threaten to do if a UK 'unauthorized launch' were in the offing - and actually do if they were caught on the hop. I also seriously doubt they do not have other hard-coded options available to them in the operational and guidance software systems as well. In fact I'd be gobsmacked if they didn't.

As for successive PM's 'repeatedly stating that 'the US has no veto' - sounds a bit like Clinton's "I did not have sex with that woman' to me".

The Oratory school is a training academy for the Waffen SS?

I must get Hitch juniors name down at once.

Neil Kinnock is a

"foul-mouthed, pompous, self-righteous thicko who's done rather well for himself on the back of his tribal loyalties."

Norfolk Blogger: To be pedantic, I would have thought that a school teacher would have known that in New Zealand it is spelt thus Māori and not thus maoiry...

You mean you think he would have been worse than Major was?

Spitting Image had him off perfectly:Lovely lovely, doctors nurses, lovely lovely. Fall over on beach...lose election...Go to the EU and make a packet.

Nice to see this blog continuing the Tory tradition of gross inaccuracy and inuendo. If Chuck Unsworth has recovered from his conspiracy thory, Labour elected a leader after NK. He was called John Smith, and lead sucessfully until his unfortunate demise.

NK's real acheivement was to plough the ground for TB's reforms.