Bully for Bull at Pride in Brighton 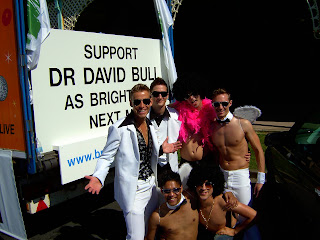 And they say the Conservative Party hasn't changed. This is Dr David Bull and, ahem, friends at the Brighton Pride event last week. He's the candidate for Brighton pavilion and he led 25 Tory supporters on a float with a Saturday Night Fever theme. The event attracted some 120,000 onlookers.
The Conservative Party also had a stall in Preston Park which received a very warm reception. On the stall, which was manned by the newly-formed Brighton and Hove Conservative Future, were postcards spelling out the facts about David Cameron’s voting record on Equal Gay Rights as opposed to Gordon Brown’s. David Bull said of the day:

It was wonderful to see the whole Brighton Community together with absolutely no
hint of prejudice. It reaffirmed my desire to represent this constituency and to
show voters that David Cameron’s modern, inclusive Conservative party abhors
discrimination. We wanted to make a statement by taking part in Pride. We
represent the whole country in all its diversity.

Well, good on him. Maybe I should have tried that in North Norfolk.... Hmmm, perhaps that's where I went wrong :)

Iain, we will know things have really changed when openly gay candidates from all parties can stand and hope their sex lives are not a factor in the election in all areas, not just Brighton.

I'm sure the Conservative Party stand was well received. Clause 28 literature out was there?

Oh Bob you old cynic! As a candidate selected for Preston Park in the dim and distant past )though I never stood as I got a job back up North) I can say the Brighton and Hove Conservatives have always been very forward thinking. That's probably why the Tories are now in control of the City again.

The Tory party was the first to have a woman PM and a gay PM.

The Tory party was also the first, and only, British political party to have a Prime Minister not born as a Christian as well - Disraeli.

Between Disraeli, Wilberforce, Thatcher and, (perhaps) Ted Heath we have a better record on promoting people of "minority" backgrounds then we are ever given credit for by the left or the media.

Iain, isn't the charming village of STIFFKEY in Norfolk North?

Reputedly pronounced "Stewky" by locals (is this true?) the village was made famous in the 1920s by the Vicar of Stiffkey, who spent much less time ministering to the spiritual needs of the community than he did in London performing a unique "outreach" to young prostitutes. This ministry ended badly when the vicar was tried in ecclesiastical court and defrocked. He decided to take his case directly to the British people, and also earn his daily bread, by exhibiting himself in a circus. Unfortunately, the ex-Vicar's protests were cut short when he was eaten by a lion.

For more details, see The Great Unfrocked by Matthew Parris. NOTE that despite his eccentricities, the Vicar of Stiffkey was popular and respected by most (though not all) of his local flock.

Iain, perhaps you can tap into this fine tradition at the next election?!?!

"Between Disraeli, Wilberforce, Thatcher and, (perhaps) Ted Heath we have a better record on promoting people of "minority" backgrounds then we are ever given credit for by the left or the media."

Is that good then?

Anybody for the majority?

"I can say the Brighton and Hove Conservatives have always been very forward thinking."

What does that (forward thinking) mean then?

It is important that the Tory Party rediscovers its tradition of social liberalism and tolerance and returns Thatcherite prejudice to the margins where it belongs.

Matt is right - the party has a record it can be proud of, but tends not to draw attention to. Don't forget gay Cabinet minister Harry Crookshank in the Churchill cabinet, the role of Humphrey Berkeley in pressing for the implementation of Wolfenden etc.

It is a pity that the homophobic tendency in the party tends to noisier than the social liberals.

Wonder what Verity and hitch have to say on this topic.....

You cannot be serious!!!

What a load of chancers. If Brighton populated by Sea Bass, rather than homosexuals, Conservatives would be going on about how they voted for fishing quotas.

This doesn't prove anything, other than how local politicians know which side their bread is buttered.

If every artist, every rock band, every bar and every hotel in Brighton doesn't embrace gaydom with delirious joy, they are shunned. It's fascism. Let's not pretend otherwise.

Richard & Pauline would be proud!

Right behind you David!!

Bless him! He looks gorgeous...

Ah, Brighton. "A town waiting to help the police with their enquiries".

The Conservative Party has changed in that the country has changed and it reflects that .It is only the Labour Party that think they deserve a medal for not picking on Gays .Their wish to give political pleasure to every orifice however requires bizarre contortions for example when Living stone will divide his time between sucking up to the gay lobby and the Muslims who would like them stoned to death. Only mental invertebrates like Piper can simultaneous blow and suck in this manner and only mental pygmies can slither under the moral limbo pole. The Conservative Party should continue to as reasonable questions about why the gay urban elite have been able to propel their cause far above its deserving especially in their extraordinarily privileged access to children and school materials.
I know a like quite a few gay men and I try never to say anything I wouldn1`t say face to face and I have expressed this view corporeally so to speak . Funnily enough not all gay men are as sure as Iain is that gays are equally likely to provide a stable and appropriate environment for a family and several have written about the assumption that gays are homogenous and an undivided opinion .
Meanwhile beneath this civilised and I hope tolerant debate the visceral loathing of homosexuality not to say , foreigners is something Labour exploit across the country and Hodges racist outburst is only the tip of the iceberg . I see now that it is the Liberal Party who are the only hope is allying against the \National Socialist Reich and between uis the difficulties are far more style than substance in that we agree the state is overmighty and that Gordon Brown should not direct every second of opur lives ans free English men and women.

Incidentally I am moving to Lewes akong the coast from Brighton in about three weeks so if anyone knows anything about the local Conservative scene I`d like to know . Looks like I`ll fit right in

What really annoys me about that photo is that the sun is shining. It is almost worth becoming a player of the pink oboe just to take advantage of the temperate climate.

Let's not forget the classic description of Brighton as "a town which always seems to be helping the police with their enquiries." (Yes, I know it's a city now.)

Can anyone place the quotation?

Mr Lanfried
That is a Keith Waterhouse quotation

Historically the impetus for anti-homosexual legislation in Great Britain came from the left, not the right. For example, it was the Radical MP Henry Labouchere who secured passage of harsher penalties for sodomy, etc. which were eventually imposed with such rigor upon Oscar Wilde . . . by a Liberal Home Secretary.

All of this made the Tories look pretty good by comparision . . . until after WWII. Then the compass (not the pointy kind) swung round as middle class social conservatism became dominant within the Conservative Party and as social liberalism diluted Labour's traditional working class puritanism. As for the remaining rump of the Liberal Party (pardon my French) made a total U-turn by (quite logically) endorsing the most liberal position in favor of expanding the rights and limiting the disabilities of gay people.

Challenge for DC or any Tory leader is reconciling gay aspirations with anti-gay backlash. Note this is becoming easier over time, as anti-gay attitudes are less prevelant among YOUNGER people (at least that the case in the US). Also note that DC is a much LESS persuasive puritan than Gordon Brown!

Many of the gays and lesbians I know, 40-to-60-something boomers, are small "c" conservatives based upon their lifestyles and general attitudes outside the social constraints imposed upon gays and lesbians. Why the Republicans in the US and the Tories in the UK want to drive such responsible citizens and reliable voters into the arms of the Democrats, Labour or Lib Dems is hard to fathom.

Good Lord an interesting Sea Shanty Post....is this someone posing as Sea Shanty , if so please continue

maybe "Sea Shanty Irish" has started a trend that you would do well to follow...

Well, good on her! It's a shame Dr Bull won't be getting elected. Not if GB goes to the polls in October...

The people of Brighton are way too Bright to be taken in by that hogwash. As Bob says going for the pink vote in Brighton is one thing but it is not sadly balanced by the same tub thumping in Witney, Congleton and Macclesfield.

PS Tories also provided the first Jewish Mayor of the City of London through Lord Peter Levene of Portsoken, and very likely of Manchester also through the altogether less appealling Harold Tucker who was engaged in all sorts of nonsense as I recall.

News of Newmania's move to Lewes coupled with that Town's fine record of rabid bonfire bigotry brings a smail to my face. This cannot be said for the Young Tories, or Young Farmers or Young Idiots entry in the St Columb Major Carnival Parade last evening.

Would have done well in Lewes though, and on the Tory Clause 28 Stand at Brighton Pride too.

20 drunken idiots cross dressed in hijabs clutching carpet off cuts for occasional prayer miming and "comedy" names like "Miss Poppidomistan" on lollypop signs. How we laughed!

You're right Iain, the (Tory) right in this country has been put to the sword good and proper.