To What Question Have the Words 'Harriet' and 'Harman' Ever Been the Answer? 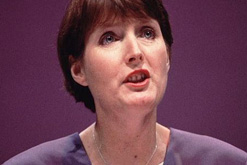 I have never understood Harriet Harman's popularity in the Labour Party. She was a completely useless Cabinet Minister - so useless in fact that Tony Blair sacked her within eighteen months of giving her the job. Now she wants to be Gordon Brown's deputy. Er, precisely why, exactly? She only seems to be able to come up with one reason: because it ought to be a woman. She fails to explain why it should be her, though. Labour blogger Antonia Bance, who ought to be a natual supporter of Harman, is equally mystified by her candidacy. Antonia explains...

I’ve heard Harriet speak a few times over the past few months, and her pitch is entirely designed to appeal to party members like me - women. Everytime I hear her say it, I think how much I’d like to see a woman in a leadership position in the party, and I’m all set to vote for her. And then I remember that it’s Harriet Harman, who cut lone parent benefit, sent her son to a grammar school, and has the political judgement of a sixth form council member. Yes, she’s been a great advocate for government action to end domestic violence, but as Dan points out, how could we trust her to stand up to Gordon when it matters?

UPDATE: I bring you exciting news. Luke Akehurst is breathlessly reporting that Hazel Blears (aka My Little Chipmunk) is going to throw her hat into the Deputy Leadership ring. My excitement can hardly be contained. I was going to throw my full weight behind Hilary Benn, but now, well I have a dilemma.
Posted by Iain Dale at 10:17 pm

she sent her son to a grammar school...

There can be no greater condemnation!!

Many years ago I was listening to Bernie Grant on the radio, one of his greatest sadnesses was that he had sent son(s) to a comprehensive school and it had badly let him down.

Just ploughing my way through "It's your time you're wasting". Thank God I'm spending the kids inheritance on an Independent school.

Just remember, if you are going to throw your full weight behind Hilary Benn, remember to rub your hands with Glee™ first.

West Ham, golf and the chipmunk. Good things do indeed come in threes (no pun intended). That's your lot for a few months.

HH, ghastly individual. Isn't she married to that oik Dromey?

I have never understood Harriet Harman's popularity in the Labour Party. She was a completely useless Cabinet Minister - so useless in fact that Tony Blair sacked her within eighteen months of giving her the job. Now she wants to be Gordon Brown's deputy. Er, precisely why, exactly? She only seems to be able to come up with one reason:

Without trying to sound flippant, exactly which cabinet member or New Labour MP does this NOT describe?

As to be Blears...this would be great and she is a laughing stock already...she is the Baghada Bob of the Government, and just as ridiculous with the shite she spouts.

"To What Question Have the Words 'Harriet' and 'Harman' Ever Been the Answer?"

Person one would least like to see as deputy anything let alone leader?

Mrs Dromey has the sort of face that needs a good slap from time to time and as for that awful Blears... Beckett looks like she has just been slapped.

They are all dreadful and ideal provided that the current DPM job specification doesn't change. If you don't do anything, nobody can blame you for getting something wrong. Just what Buggins Brown needs in a deputy because he wants to do it all.

Since when has incompetence been a bar to the deputy leadership of the Labour Party?

Judging by the current incumbent of that lofty position (and also the Deputy Premiership of Great Britain) gross stupidity is almost a prerequisite for the post.

Yes, Blears or Benn as Deputy Leader. Such a difficult choice. Benn at least emits a grim image of semi-competence and likes to think of himself as a bit of a thinker.
I suspect Blears is a significantly more alienating and irritating politico than Benn as far as the public is concerned. Broon/Blears- a veritable dream ticket for us. Does Mags Beckett really stand a chance of success- if so I might have to review my position.

The fact that a politician as incompetent and politically useless as HH can even be discussed as Deputy Leader of anything says all we need to know about NuLab. I retch whenever she's on Question Time with her (we know best attitude)

Repeatedly...then a real good kicking and finished off with a good rub down with coarse grade sandpaper.

I asked Harriet last May about the anomolies created by devolution and with a genuine blank look she replied, "What anomolies?"

"What we need is a kind of female John Prescott"

Do the government chauffers have no say upon whom it will be obligatory to sh*g?

Barnacle Bill, NO ONE hasmore knockers or is a bigger Tit than Hazel Blears. unfortunately she is less heavily-endowed in a number of other departments. makes her an almost shoe-in for the Deppity position doesn't it, in or out of her leather.

They're all hated equally methinks....

Harman has a relatively shapely pair of knockers, much better than Beckett but you never see Becketts because most people turn away in case you get a glance of her chops; a kind of instinctive revulsion, but Harmans knockers are not shapely enough to make her any more media attractive.

It's an idea for her though...get a boob job and start wearing low cut tops...it would work in Italy so why not here? New Labour have done more desperate things to get into and stay in office.

If your father is a Harley Street man and you are a couple of princess daughters out to rebel, why not take law and be a leftie......it gives you chance to make money if you ever get bored or play politics.............Daddy would be pleased to see his daughters as lawyers - it is good for the less intelligent

You'll need to be careful about where you throw your weight, Iain. It can be a bit risky chucking one's weight about, behind or even on people. Especially the likes of Blears, Harman, Beckett etc. You might end up having to see the Doctor (no, not Reid).

You leave Harriet alone. She isn't permanently orange like Peter Hain. She isn't afraid of spiders like Hilary Benn. And her idea of a good night out doesn't amount to a few pints with the lads down the local lap dancing club as it does with Jon Cruddas. She's also the most gaffe prone of all the candidates and the most snooty.

But have you noticed how often she's on the BBC poliitics programmes? The leftie bias I suppose - does she ask or is she invited? Does the BBC realise how offputting this snooty busybody is? I turn off when she's on, I can't bear to watch or listen.

Wasn't the National Council for Civil Liberties hand in glove with the old Paedophile Information Exchange back in the days when the former was run by Hatty and Patty? Yet now Hatty wants to be Deputy Leader, while Patty is actually responsible for social services throughout England. Worth looking into, I feel.

At that rate she should sod the deputy leadership and go for the real thing.

She has a face I just long to slap.

Iain, you have quite a gift for double entendres in your penultimate sentences. Deliberate or not, most amusing.

I think that if she was up against that smug wrinkled cackbag of distressed leather Peter Hain, I would definitely choose her. Alright, she has done absolutely nothing in the Cabinet (even her cock ups are boring), but I would emphasise that she ISN'T Peter Hain.

It should also keep her off Question Time.