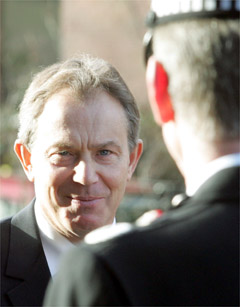 A couple of weeks ago I wrote THIS post about how former Number 10 apparatchik Adrian McMenamin was crowing about the Number 10 website overtaking both Guido and my blog in terms of hits. To be honest I was astonished it wasn't way ahead of us anyway, but that's by the by. The reason it overtook us in dramatic style was the introductions of ePetitions on the site.

However, today has shown that these ePetitions are a complete gimmick and the Prime Minister has no idea what the petitions are.

Today in PMQs Blair was asked about the effect DEFRA cuts were having on the Waterways. (the point is that due to the ballsup of farm payments DEFRA have been fined by the EU. To recoup this they have slashed British Waterway's subsidy). Blair admitted that he knew nothing about the cuts or British Waterways.

What has this to do with the ePetitions ....? The Save Our Waterways petition is up there in the top 10 of petitions (at number 9 as I write). In other words the epetitions thingy is a complete and utter fabrication meant to make Blair look good. They are, however, completely ignored and the PM isn't even told about them. Another good bit of Labour spin, funded by you, the taxpayer.


There is much ranting about this on the waterways newsgroup uk.rec.waterways .....
Posted by Iain Dale at 4:46 pm

While I have my doubts about the connectivity between the ePetitions site and Blair himself, you're making something of leap to go from "Blair hasn't read the ninth petition" to "Blair has never heard of these things".

I'm no fan of Blair, but you're extrapolating and sensationalising one short answer.

I like the photo of a policeman speaking to Bliar.

It would make for a good caption competition.

"So; about this brown envelope and this attached ermine robe, Sir..."

I am going to take you to task on this one.

When I suggested to you that the whole "Dave in India" project was "complete and utter fabrication meant to make Cameron look good, you were distinctly sniffy about it.

I pointed out that the blog was moderated by Sam Roake, and that Cameron never got to see the critical comments. Cameron subsequently did not deliver on his promise to address some of the questions people sent in.

Perhaps the e-petitions are a means of collecting names, emails, addresses to be saved as a dissident list for some NuLabour dodgey purpose. So far they have many thousands and still a year to go.

wrinkled
there wasn't a nulab droid crowing about how wonderful it was that #10 had overtaken Guido and Iain ....

It rather reminds me of a comment I saw, I think on this blog. It went something like

"The Labour party does consult the people, its just that the people are wrong"

I suspect that there are a lot of things the Prime Minister is ignorant. For example, how to run the country.

The Waterways are also falling foul of EU rules over the use of "Red Diesel" which is due to be reviewed.

Waterways groups are optimistic that The Chancellor will renew the current exemption we enjoy on "pleaasure" craft.

Currently the cost of red diesel is about 40p per litre - a little perk currently enjoyed (until the end of this month) by those who use the waterways. The Canal System is not free as some people think. A hefty licence is required to run a craft, plus insurance, plus mooring fees plus a marine "MOT".

It is funded by lottery grants and the endeavours of local volunteers for the pleasure of all who use it.

Apart from anything else Blair probably has thousands of homeworkers in India hitting his site 24 hours a day.

It works for comment spam apparently. Those "great blog, get your viagra here" comments are now from real people who are happy to earn 20pence an hour. So much for word verification security.

"The e-petitions thingy is a complete and utter fabrication meant to make Blair look good. They are, however, completely ignored and the PM isn't even told about them. Another good bit of Labour spin, funded by you, the taxpayer."

Now Iain, that is a little hasty and intemperate n'est-ce pas? The only criticism I have of the e-petitions is that they are long overdue. In fact one wonders whether Blair has set them up now to give Brown some trouble for the future. Whatever, they are here now and we should welcome them.

The point is surely that their success depends entirely upon us. If a petition obtained a million votes it could scarcely be ignored. I personally don't know anything about this DEFRA business, but if you feel strongly about it Iain, then why don't I see your name on the list? Have you signed any of the petitions as a matter of interest?

Ultimately it comes down to the electorate to make a difference. Sometimes I feel more cynical with the people than I do with the politicians who merely hold a mirror up to our souls.

Well done for highlighting this Iain. Actually, in the House, Blair said "I didn't know much about our Waterways until this (PMQ)". But these things are almost always gimmicks, including the ones a great many MPs and, dare I say it, parliamentary candidates, put on their websites. The only trustworthy communicators nowadays are people who personally blog and handle the replies. The rest are increasingly looking like what they are, a load of unresponsive, undemocratic, self-serving jobsworths. They've been this way for generations of course - it's just that with the internet, it really shows and it really hurts.

Who needs 20p an hour ? I'm quite happy to recommend Craig Brown's 'The Tony Years' as well as 'Private Eye' for free !!!

They are literary viagra...

I spy a good game!
"We the undersigned petition the Prime Minister to test the closed petitions feature (and ignore this petition). More details.
Submitted by Tom Steinberg of mySociety – Deadline to sign up by: 03 October 2006 – Signatures: 1"

Laurence Boyce said
"If a petition obtained a million votes it could scarcely be ignored."

Why not? If there were a petition that said "Bring back corporal punishment", it could easily get several million votes, but would be completely ignored.

By the way I don't think you vote for a petition, and I have voted for several recently, including one to beatify Ringo Starr.

I'll be on Sam Roake's case soon enough. Turns out he pissed away every advantage this new technology allows us in order to play some good old-fashioned Tory games. Search for his name in any search engine (then do a whois on his brand new domain name) to see how desperate and pathetic the little creep is.

Still, Iain and Guido led the way. You have to give them credit.

To be honest, what on earth did we expect? Blair (or at least, No. 10) love gimmicks, because there's always some people who think that this time, it may not be one.

Maybe they take bets on how many they can dupe.

Iain calm down, things are back to normal, Guido has more interest than the PM again...

what a pity. i was hoping for Spandau Ballet's "Gold" to be introduced as the UK national anthem in time for the 2012 olympics.

Sam Roake - doesn't he play for West Ham ? Guess Iain is pleased now that Curbishly is the new manager, rather than Svan Goren Eriksson

Guido Fawkes Esq. said... Iain calm down, things are back to normal, Guido has more interest than the PM again...

Alexa stats have already been discredited on your blog... before you banned me for discrediting them, that is. FFS, you're worse than Blair.

Just 2p from the mySociety perspective: we built the No10 petitions system, as well as other non-partisan democracy sites like WriteToThem and TheyWorkForYou.

We agreed to build the system as a civil service funded project, and would have turned it down if we had been asked to do it by one of the parties, or any other obviously partisan group. The neutrality we maintain across our other sites is simply too important to be worth putting at risk.

Furthermore, we made tough demands on No10 to ensure that the site would be unprecedentedly transparent: check our the rejections page, and the way it shows as much as is legally possible of rejected petitions. Does your (or anyone's) blog have a page where it shows rejected comments?

Also, we, not No10, are the data registrars of all the personal data. No10 can write up to two messages to signers, but they don't get their email addresses. [NB I think the ability for the govt to send its response to a petition directly to signers is one of the very best reasons to have a petitions site at all: currently it is simply too expensive to do it on paper].

Most important, petition system is not for Mr Blair, it is for British citizens to be able to petition the Prime Minister of the day. I hope that as a fan of internet-enchanced forms of democracy you'll encourage your own party leadership to use it if they take power.

Lastly, there are now over 1000 petitions live on the site. I leave it up to you and your readers to decide whether or not Mr Blair should have known about the one you cite.

You beat him this month in the ratings anyway.

Tom Steinberg, classic New Labour business waffle-:
"Most important, petition system is not for Mr Blair, it is for British citizens to be able to petition the Prime Minister of the day." - so what use exactly is it then?? Worthy of Patricia Hewitt / the big 5 consultancies / the banks at their worst.

BTW Iain, when are we going to do something on your site about bank charges and why are the Tories not jumping onto this important issue. The banks are (a) operating a cartel on charges and (b) systematically levying charges illlegally. Why exactly are the tories silent on this?

Sigh - that'll teach me to feed the trolls.

Can we start talking about Israel/Palestine yet?