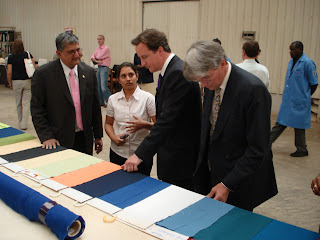 David Cameron arrived this morning and within half an hour of his getting here he held a briefing on the Globalisation Commission Report which is being published tomorrow. He then left for a visit to a local textile factory. Prior to the genocide it had a turnover of £80 million. A few uyears later it was down to £3 million but it has built itself back up now. It's going to move into making mosquito nets. Amazingly very few Rwandans have these nets which explains why more people die from malaria than from Aids. At the moment only 900,000 nets are produced in Rwanda every year, but this factory aims to up that figure to five million - probably the best healthcare investment that could be made.
From there we accompanied David Cameron to the National Genocide Memorial in Kigali, where more than 250,000 are buried. They have an amazingly moving exhibition centre, which really brings home to you the horrors that people went though only thirteen years ago. Cameron was clearly moved by the experience. He then placed a wreath on one of the graves. 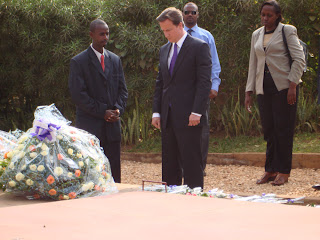 Tonight we all attended a barbeue organised by the SURF charity, where all the twenty different project managers explained what they had been doing. The great thins is that all the lobby journalists on the trip have lost their initial cynicism about the trip and clearly understand the good works which are being done here. Will Woodward from the Guardian has written a blog on the visit today which ends with these words...

Occasions like this make the two-day visit seem less of a stunt and more of a
necessary rite of passage for any aspiring British leader.

David Wooding of The Sun describes the 44 people here working on Project Umubano as "the real face of the modern Conservative Party". And he's right.
Posted by Iain Dale at 11:17 pm

At last some common humanity from journalists more used to finding ulterior motives in politicians.

Understandably, there is ususally a lot of cynicism within people when politicians go to third world nations in such a way. Such mistrust comes from a variety of sources, but I think this is a healthy start for many different reasons. It is often so easy for the media to inflate such cynicism, and the fact that this venture has produced such positive reports can only be a good thing. One could say it is healthy for such a modern, compassionate Conservative ParTy. In honesty I think it is healthier for state of British journalism than anything else - it seems, finally, that journalists are starting to peer through the fog of pessimism and realise that some politicians might actually be helping because they genuinely want to, and care.

Diablo
How much attention are the Chinese and Indians paying to project umbongo?
This is nothing more than self indulgent tosh.
I can see the point in exploiting (in a good way) Africa as a market for our goods , unfortunatley we dont make anything anymore so daves visit is just a vanity project.
Whilst Dave inspects marie antoinette milking parlours the Chinese are stealthily buying up the goodies ,oil , minerals, productive land and influence.

Hitch, are you on a particularly cheap brand of lighter fluid tonight?

You are making no sense whatsoever.

I know its the end of the month and cash flow may be tight, but try cutting "Dr Spungeons Patent Elixir" with some tonic water at least.

Hitch - I know you are bonkers but you do make sense quite often. Yep, you are right about the Chinese domination of the supply of key raw materials and commodities all around the world.

But "marie antoinette milking parlours"? You've lost me now. Something to do with the French?

Iain, "Amazingly very few Rwandans have these nets which explains why more people die from malaria than from Aids."

Well, actually world wide many more people die each year from malaria than aids, however it does not (well at least until Bill Gates started throwing large amounts of cash at it) get the same funding because it is not a fashionable condition.

"the real face of the modern Conservative Party".

Nope: the voters of Ealing Southall and Sedgefield experienced the 'real face' of the modern Conservative Party.

That's why they rejected it.

The ice age is coming, the sun is zooming in
Engines stop running and the wheat is growing thin
A nuclear error, but I have no fear

'cos LONDON IS DROWNING - AND I - I LIVE BY THE RIVER

This is not the right thread I know but I think we should take a close look at Fair Deal Phil who has yet another a cloned Labour Party blog site.

Apparently he's a mate of our old friend Quentin Davies - remember him? That principled huntin', shootin' and fishin' ex-Tory who didn't like David Cameron's "spin"? Well, this is what he said to the Stamford Mercury:

Stamford, in case the district council has forgotten it, is the oldest conservation area in the country. It is one of the loveliest – I always claim the loveliest – stone town in England. Only Bath really rivals it. As such it is a major tourist attraction and much of the business and therefore the economy of Stamford depends on tourism.

Stamford also has a major traffic problem. Jams regularly stretch half a mile north and south of the single bridge.

Far from my concerns being selfish, I am quite convinced that Stamford is quite the wrong place for the travellers themselves.

Many of them live on benefit. If they are to have any chance of getting into a job and escaping from permanent welfare dependency, they need to be near a major source of employment."

Now, would you say he was Old Labour, New Labour or Brown's Labour? Or is he a Tory in sheep's clothing?

Ann Widdecombe: 'I'm not sure many voters know where Rwanda is.'

What are you doing to bring your hang 'em and flog 'em tendency into line?

My former employer has been one of the Patrons on SURF for years. I can scarcely think of a more worthy cause.

I am - genuinely - worried about you guys. The modern conservative party is currently lying face donwards in the floods - it's 'real face' may soon be that of a drowned man.

Here we go. Dave's got two days, and he's talking about mosquito nets. Would that be the pet project of Giddy's pal and every Third-Wayer's favourite development economist, the dripping wet Jeffrey Sachs? And is Jeffrey right? Is he heck (see comment and linked article here).

Should Conservatives be taking advice from a man who thinks that the answer to most Third-World problems is to throw money at them? Well, this lot probably should, yes. It's what modern Conservatism stands for, right?

This has confirmed exactly what I suspected about this trip. I was prepared, following Adrian Yalland's patient explanations, to give it the benefit of the doubt, but it looks like my pessimistic predictions were right. This isn't about learning or about contributing. It is about getting a platform to project soggy third-way non-solutions to the world, while ignoring the real problems and solutions both at home and in Rwanda.

What about Dave's own poor constituents who are suffering appalling lives thanks to the recently flash floods? Obviously courting the vile PC brigade by hugging genocidal Hutus and self-righteous Tutsis is more important than defending the interests of the long-suffering and down-trodden British people for the Dave and Iain show.

Neville Chamberlain would be so proud of Dave.

Oh dear is that tim nice but dim following Cambo around

The flooding is Dave's fault.

The 1922 Committee should take note.

So not only a BBC journo, but a Sun reporter too.

And I thought this trip was about doing good, not press coverage Iain.

On a lighter note, if this was Guido's blog, the caption for the top picture could read:

Girl in white blouse 'Are you sure we can't interest you in any of the blue ones?'

Norfolk Blogger, you demean yourself with statements like this. Are you saying journalists hould have been banned from coming?

Remind me, a few weeks ago you said you thought Ming should depart the stage. Suddenly, and for no apparent reason, you have changed your mind. Ming has done nothing in the last few weeks. he hasn;t had any press at all. It strikes me you are rather jealous at the fact that this worthy trip had gained press coverage.

I think everyone's taking the politcal opportunity of this flood thing too seriously myself.

It's up to the government, civil service and other authorities to sort out. Surely Cameron, once he has been briefed properley upon his return, can have a go at Brown over flood defences on his return.

Wading in now isn't actually going to help anyone who's been flooded is it?

Just say NO to socialism Britain, Rwanda or anywhere else.

C4, we’ve provide the country with a rather modest £46 million in bi-lateral aid last year, much of our support has been strategic and targeted at assisting the country’s civil infrastructure, as well as providing advice on issues like agriculture and the push towards universal access to primary education. That’s not socialism. I’m afraid it does rather look like your original accusations about the “self-righteous” victims of genocide was just the natural result of your frothing histrionics, rather than any comment on the role of the market in our approach to international development…