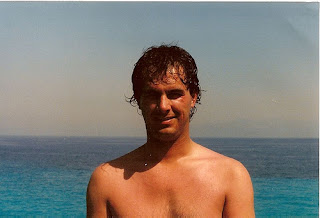 Last night on 18 Doughty Street I was asked if I had ever grown a beard. I did once, but it was a bit ginger. Anyway while trying to find a photo of that ugly period in my life I happened across this one, which got my two female guests rather excited. They reckoned I must have starred in a gay porn film. I prefered to think of it on a par with that moment in the latest James Bond film when Daniel Thing emerged from the sea. There is no end to my self-delusion, you see.
Anyway, isn't it marvellous that I haven't changed much in the 22 years since this photo was taken? The creams are obviously working well...
UPDATE: What have I started?
UPDATE: OMG, my secret is out. I starred in V...
Posted by Iain Dale at 3:05 pm

There is no end to my self-delusion, you see.


You can say that again. The Telegraph article is equally delusional

My God you poor (Daniel) thing politics really has taken its toll!

If it was taken 22 years ago, the reason you were so glowing was obviously the beneficial effect of Mrs T's premiership. I also find I don't look as good now as I did then, no doubt for the same reason.

If you really want to distract us all from the bucket of egg you got on your face after your desperate attempt to needle Tom Watson yesterday, I think pictures of kittens would be a better move.

One for the ladies?

Be careful, Iain - you'll getting Peter Ould's hopes up, you know...

Why deny us the full frontal, Iain?

A lot of candidates would still be using that photo on their election address!

What is it they say cameras never do? :-)

I `m guessing this photo has been touched up even more than you have Iain.Vanity vanity thy name is Dale

I agree with Newmania
lets have a look at your package Dale , I say this a straight man who once dared to strut his stuff in speedos.
Thank god for baggy shorts.

However, it does nothing to alter the sense that the Conservatives are losing the plot.

Did these ladies say they'd welcome the opportunity to look at Daniel's Thing, or something? Anyway, you still need the services of a good barber.

From youthful to youthless as my lisping friend put it .

O/T: Didn't GB say that popular Number 10 petitions would trigger a debate in the house? Lets test this point!

Delighted to hear on PM tonight that Mr. Tun, VC, has arrived in the UK to allow him access to his treatment. Well done to all who expressed disgust at the initial decision to refuse him entry - it does show that this Government can be shamed into changing its position.

Iain, is that really you?

OK, who did you persuade to pose for the picture?

But I sympathise with your ginger beard syndrome.

Is that the fabled "Clear Blue Water"

My closer inspection suggests that you take either far too much notice of bogus claims, or are a tad economical with the truth.

Didn't you want us to see you in your Speedo's? LoL

A blog entitled "one for the Ladies" with a picture of a half-naked Iain Dale underneath.

O wad some Power the giftie gie us. To see oursels as ithers see us.

Hang on. That's a picture of Peter Duncan.

I don't think the creams are working well. And the Carbolic Smoke Ball Hair restorer did not do what it said on the tin.

Demand your money back. Not a bad photo though.

Iain - indulge me. Have a look at my little attempt at humour on the back of your "hunk" photo.

As for the updates, I'd say rather that you look like one of the supporting players in Fantastic Four, and not The Human Torch either.

Steady Iain! One more picture like this and Tom Watson may become your number one fan! PS: where did you get that syrup?!

Oh come on, you aren't doing too bad. Things happen around the age of 40: merely sniffing a curry adds 10 pounds, and alcohol no longer passes through the liver/kidneys, but instead hangs around until you have to go up a shirt size (or two).