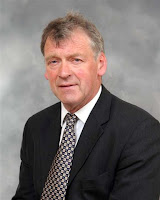 There was one Welsh politician I was gutted for on Friday morning and that was Glyn Davies AM. He is by common consensus the best politician blogger in Wales and he's a real character. The wretched list system let him down. Had the Tories not won the constituency seat of Carmarthen he would have made it back. Read THIS post on his blog which explains how he is getting over his defeat.

At the request of the family, I read a 'eulogy' at the funeral this afternoon, which took place in my local Berriew Church. There was a big congregation and I needed to get it right. I had to forget the pathetic self-pity I've been suffeering from since losing my Assembly seat on Thursday. For an hour or two the only thing that mattered was 'getting it right'. And then it got better. Over the sandwiches, almost the entire room seemed to be commiserating with me and begging/challenging/ordering me to stand against Lembit Opik in the next General Election. I felt the first green shoots of recovery emerge out of the oppressive blackness of electoral defeat - a bit like the first stirrings in the loin area after my bowel cancer operation.

I can't read my usual bloggers though, because Cairsey told me that they are littered with kind comments. Even Arsembly for God's sake. And there's another strange thing. I can't read nice comments without crying. Now, I'm no 'new man' on this issue. When I was young, real men didn't emote - until the brilliant yob, Gascoyne came along - the big girl. But since that 4 days on morphine, after the surgeon cut away my rectum, anus etc in 2002, I cry at the slightest provocation. My eyes go all misty and my voice goes squeaky and breaks up. If only I could control this like Blair does, it would be politically useful.

He seems like a really decent chap - hope he makes a come back soon.

That Glyn is a great bloke is about the only thing that unites the parties down Cardiff bay.

I wonder if in his absence the Welsh Conservatives will continue on their long march to being a party that is Welsh in sympathy or will they now retreat back into their historical comfort zone.

Glyn's a true Conservative and a great character. Welsh Politics will be the duller for his exit from the Assembly. I hope he'll be back shortly.

Comments of regret about Glyn takes precedence over any other conversation in Cardiff Bay including talks of coalitions. He was a great friend and will be missed more than any other politician that has left Cardiff Bay over the last 8 years. Some people and blogs are calling for Lord Davies of Montgomeryshire. Hear, hear, I say.

Plain speaking and upfront as a politician and a blogger.

He will be missed.

No to peerage; go for Lembik's scalp!

Glyn Davies has made an immense contribution to Welsh politics and the Conservative party. He thought outside the box and had the courage to even admit that he had been persuaded that he might be wrong on an issue because of comments on his blog. A genuine good guy who represents the best in traditional Tory values.And don't worry I'm not a Tory . In fact I'm an active member of the Labour party but I still know a good guy when I see one. All of us in Wales look forward to him giving Opik the bloody nose he deserves.

Leighton Andrews AM- as campaign director- should resign over Labour's election results in Wales.

When will you realise that STV is the only sensible voting system which is roughly proportional- and gives you a constituency link for ALL MPs.

I know you like FPTP, but the Conservatives would be grossly under-represented without PR

Yep Glyn's a good man. He'll be back. Suggest he unseats Opik ,