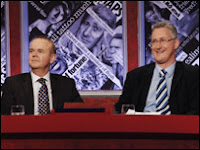 My political antennae are (is?) telling me that Lembit Opik is going the way of Charles Kennedy and falling out of love with politics in favour of a celebrity career. Yesterday, accoding to THIS article just put up on the BBC website he forsook a meeting with Welsh Liberal Democrats on the future of coalition talks, in favour of recording tonight's episode of HAVE I GOT NEWS FOR YOU. Opik the chairman Leader of the Welsh LibDems and as such would normally have been expected to play a key role in deciding the LibDems' strategy. The LibDem AMs and other senior Welsh LibDems met yesterday in Llandrindod Wells to decide what to do. Lembit says that he had to be in London today anyhow so it wouldhave meant a five hour round trip. Er, so what. That's what happens when you're a senior politician. Hasn't he got a plane, anyway?!

I like Lembit. he adds colour to a grey political landscape. But he's better soon buck his ideas up. His constituency party is already said to be considering deselection, and even more seriously, he will possibly face a very strong challenge at the next election fronm the Conservatives - hopefully in the shape of former AM Glyn Davies.
Posted by Iain Dale at 2:23 pm

Lembit is not Chairman.
http://www.welshlibdems.org.uk/e-whoweare_officers.asp

He has indeed got a plane (and licence to fly it) - that is why I like him, he speaks up for general aviation. Alternatively I could have flown him across to Cardiff in 30 minutes, expensive but sometimes needed for the running of democracy. He has no excuse.

Great that the Leader of the Welsh Liberal Democrats is wanting to keep anonymous ! Or maybe it is on the website.

Sadly, the outcome of this is that the whole Liberal Democrat movement will end up as 'collateral damage'.

I like Lembit Opik, he does add to the gaiety of the nation, and we need personalities in politics, but sadly he needs to balance that with the needs of his party, otherwise they are heading for the wilderness

"I like Lembit. he adds colour to a grey political landscape."

No Iain. It's his BIRD that adds colour!!

Fook me she's a hot chick.

Tony Blair is being touted as a successor to Wolfowitz. He becoming like Sven Gorren Erikson. Every time a job falls vacant Tony jumps up and down shouting : Me. Me. I can do that.

How about a conservative MP making sure he' screws up the FOI in his and his mp friends favour ,Iain ,isn't that more important than jackass lembit.

However, he has made his position clear before he went!

Mr Opik said he had explained to all members of the party that he would not be there, and had worked closely with them so that they knew where he stood.

He said he also said had to be in Parliament on Friday morning to work on a bill, but he would respond to party members if they had an issue with his absence.

Mr Opik said he would be there for Tuesday's meeting and Saturday's special conference.

If his local party are seriously considering deselection then they have obviously decided that there are too many Welsh Liberal democrats MPs. I think the reality is that you either love Lembit or loathe him wherever you stand in the party, and most people grudgingly in some cases realise he has charisma and a personal following that 99% of the others in the party don't have.

Hello Iain,
I hope you are having a lovely day in your lofty Blog tower pervaying your domain. I was looking at the links on my Blog today, especially the ones where I had posted a prominent logo like yours Iain. I noticed that several of the Blogs couldn’t even be bothered to link back to me. I know its not written in stone but it is a nice gesture, especially from hugely successful powerful Bloggers like yourself. What makes it even more annoying is you remembered where to find me when I did a piece for your Book `Memories Of The Falklands` that featured in the Sun newspaper recently, a piece that will have earned you a few bob in your arse pocket, sadly not a penny came my way. Did any go to any Falklands charities I wonder? So not that you will be bothered Mr almighty Blogger but I have deleted your link from my tiny little Blog. You seemed to think I was “Iffy”Hmmmmmnnnn well now you know what I think, have a nice day.

The man is an idiot.He could lose his party an exceptionally safe seat that they have held bar one election for generations.Dumping and publicly humiliating Sian Lloyd was not the greatest career move for someone with a Welsh seat to defend.He prefers comedy to important business.He may find that he has plenty of time on his hands to laugh in future.If Glyn Davies runs against him ,he will be toast.

Just a few good men & women MPs tried to uphold the integrity & honesty of the FOI act..albeit not enough... & those,some who will be well remembered, pushed through this new legislalation to withold information they dared say was for their constituents confidentiality!!

Nothing to do with their own dodgy expenses then...or the fact that Labour MPs were being whipped to attend..whilst the Front benchers were supposedly neutral?

I suppose his view is at least on hignfy people will actualy listen to him.As a libdum this would be a welcome change and cheeky girl quips will wind him up.

I don't. Attention seeking clowns like him demean and infantilise British politics and British society and f*ck knows it's infantilised enough already.

Lembit may be, but Charles Kennedy remains totally 100pc committed to his political career IMHO.

So you would have preferred Lembit to have stayed in a relationship that both of them had clearly had enough of, just so he could "save" his seat?

PS: there is no evidence that Lembit's seat, or even re-selection, is under threat.

Iain, which route are you heading down?

I suspect he rather wishes he had gone to the coalition talks....

He was crap too.
On that performance maybe the Welsh Liberals asked to him to stay away.

Lembit Opik was useless and boring last night on HIGNFY, he should have stayed in Wales instead.

He even showed himself up when he became petulant afetr a bit of mild teasing from Hislop and childishly told the Private Eye editor to "go back to where the gnomes come from", a playground style reference to Hislop's lack of height.

Don't give up the day job Lembit. Not until you're voted out anyway.

Lembit should not have been so Cheeky

Lembit is finished in Montgomeryshire, not turning up to that meeting was the final straw. If the Tories pick a local candidate like Glyn Davies then they will walk it. I'd prefer to see Glyn in the Assembly though rather than at an increasingly irrelebvant Westminster.

Come on Iain there will always be another meeting. Real, decisions aren't takien at large meetings they are merely ratified.

I also doubt if being on HIGNFY will make the electors want a Tory.