Labour Complain to the BBC About ... Me 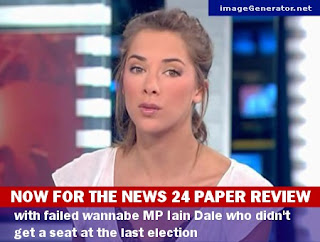 The BBC appears to have angered bigwigs in the Labour Party with its seemingly endless invites to Westminster blogger Iain Dale to review the papers. When Dale appears on News 24 to give his verdict, he is now billed as a pundit from 18doughtystreet.com. No, Axegrinder hasn't heard of it either. Dale spends
most of his reviews focussing on anti-Labour stories in papers like the Daily
Telegraph and the Daily Mail, mutter Labour's mediua managers. They are now
privately threatending to write to the Beeb to insist Dale's "real credentials"
are listed whenever he appears. "Just what is this website?" moans one
apparatchik at Labour's HQ. "Dale is best known as a failed wannabe MP who
didn't get a seat at the last election - and should be billed as such."

Oh dear, haven't they got better things to do than worry about someone who does a newspaper review twice a month at a time of night when only insomniacs are watching? They seem to ignore the fact that I am always joined by another reviewer who is almost always from the left. As for my billing, if Yasmin Alibhai-Brown can be billed as from The Independent, why on earth shouldn't I billed from 18doughtystreet.com? In actual fact, last Saturday was the first time they did that. Obviously now I know it gets under Labour's skin I'll make sure they do it again.
And just for the record, those who regularly watch the reviews I do on News 24 and Sky will know that I do not just pick anti-Labour stories or indeed only pick stories from the Mail or Telegraph. Anyway, just to alert the Labour media monitors, I'll be back on News 24 on 26 May. Happy viewing guys.
Posted by Iain Dale at 1:27 pm

Do you think you should state the graphic is a mock-up?! The lovely French newsreader Melissa Teuriau would never be so insulting to you!

...though it does say 'imagegenerator.net' I suppose.

How pathetic , of course the Labour party are used to having the BBC as their own private fiefdom except when they disagree , for example in Iraq. When someone like Iain who is a representative moderate Conservative appears they its like a dirty mark on their pristine carpet. The subject of the BBC came up the other day and someone mentioned a list if those who have worked in BBC current affairs who have actual Labour Party or open left sympathies. What about this one

I mean Folly Toynbee was actually head of social affairs ….( And I have never heard of the Axegrinder)

Iain you SHOULD be reading only right wing stories to try and get some balance as 99% from the BBC is left leaning at best.

Be happy that you're getting under their skin.

Does that mean that Labour will support the BBC in dispensing with Jim ("when we've won the election") Naughtie who constantly manages to ruin my breakfast.

I'd wear it as a badge of honour if I were you. You don't strike me as overtly biased when you're on the BBC, and you are fully entitled to have credited who you work for. For myself, I would have thought that Labour has more pressing problems.

Speaking of complaints I wish to compain that my hilarious quip about left leaning fat people and toppling sofas was deleted.

I worked on it for hours

Iain, it seems to me you always pick stories from the Mail and Telegraph. But the point about you being a pundit from 18DoughtyStreet is nonsense. Lots of people read your blog, probably more than who read the Independent (ps is it?).

I actually watched you on it last night and thought that your stuff was a bit party political.

Given the gushing encomia Brown is humbly receiving on the BBC, which I'm sure these same thought police are encouraging (nay demanding) this is rather droll of them isn't it?
I suppose they think you should be joining every other contributor in debasing and humiliating yourself extolling the wonder of Big Baby Brown.
Pathetic control freakery.

If you looked that good you wouldn't care what they said about you!

One party state time is it? Frightening.

How should they introduce Oona King next time!?!

Axegrinder column in the Press Gazette? No, I have not heard of it either...

Proof, if any were needed, that the problem lies with the government/Labour machine and NOT the BBC, I would say.

Next they'll be asking for the political editor to be referred to as "The former chairman of the Young Conservatives, Nick Robinson." Sheesh.

And Newmania: several thousand people work or have worked for BBC News. Your list is pretty tiny in comparison...

So, apparently, if Labour receives a drubbing at the next General Election, the party apparatchiks will approve of former Labour MPs receiving a tag like "John Tentpeg, failed Labour MP who was turfed out of his constituency during the last election" or, to be more precise, "William Banotz, former MP, Unemployed Loser."

Iain darling, you have for some reason conjured up that marvellous 'Fast Show' character. 'Me, the thirteenth duke of wybourne reviewing the daily telegraph on news 24 at two clock in the morning? with my reputation?' Love the blog by the way dear.

It must be gratifying to get such a ringing endorsement from them. If they complain you must be doing something right.

God you'd think the party workers had more important things to worry about like the fact they're allowing that tosspot to take control without a proper contest...let's hope the next 18 months wizz by and Cammers doesn't balls things up...

Labour have the brass neck to complain about tory bias on the Beeb?

Yes, OK then, let's have an independant inquiry looking in to the whole question of bias at the BBC.

Surely Labour will now support such a move?

New labour just tell lies! I know Peter Obourne told me, this morning. Why cant we have more of Alastair campbell, finger pointing and foaming. It's such good entertainment, for us geriatrics.

Next time your on just highlight pro Labour stories if you can find any but make sure you broadcast why.

Anonymous at 2.28, I presume you mean 18DS rather than News 24. Most of the things I said last night were anti Conservative I seem to remember!

In the spirit of tit-for-tat I hope the Tories will complain to the BBC about Five Live inviting Kevin Maguire and John Kampfner onto Drive on a daily basis to give us their biased views on the day's news.

Keep up the good work

Can we also add a strapline to their relentlessly annoying adverts telling you that you can get a huge fine for not paying the license fee?

I suggest "The BBC. Because we're not commercially viable"

Press Gazette eh? Now that's real headline stuff ain't it? What next, banner headlines in the Royston Crone or the Nursing Times?

Which particular spastic 'bigwigs' are these? Does NuLab actually have any these days? I thought they were all running for cover and/or queing up to fellate Gordon.

Just because the buffoons in the fuhrerbunker at NuLab HQ are squealing it doesn't mean that anyone should be paying attention. Just issue them with the old cyanide capsules and put them out of their collective misery. They've only got a few weeks left before the Brown Terror, anyway.

Don't let NuLab get you down Ian. Keep on fighting!

And we're being brainwashed to believe that Brown isn't a Stalinist control freak who despises dissent. My Goodness! Get a sense of humour you sad Brownite martinets.
Kepp up the good work Iain, must be your humour Brown finds intolerable.

Off topic but...Did anyone hear shameless Jack Straw making the completely bonkers point on Radio 5 that Broon's coup/succession was entirely legitimate as the Tories had warned at the last election 'Vote Blair get Brown' so people knew what they were getting. Mad as a ....

YES! Jack Straw: "the Tories told you so"

Thanks for reminding everyone Jack.

Yeah, it's not as if you're any good.

Did YOU give the gossip to Axegrinder Iain?

Out of 179 Tory MPs, only 17 are women - and that's if you count Ann Widdecombe as female.

Complain, you Tories! Give the 'feminist-supporting' little shit a dose of his own PC medicine.

Iain, Sadly some of us are usually in bed when you do the papers. Clearly your website and 18doughtystreet are pro-Conservative, but it does not take an Einstein to work that out.

What do you expect from Al-BBC?

I usually pass this way via the blog roll of Stumbling and Mumbling, but you seem not to feature there this evening. Trouble at t'mill?

Iain is funded by the CIA and Moms Against Disposable Diapers.(MADD) Ask him about Aliens from another planet..he won't reply.

Shame she's not a candidate for PM. A potential leader I would really like to serve under!

Who is this Axegrinder person? Some sad little wannabe no doubt. Whoever he is, how dare he attack Iain.

It would be interesting to see how often News 24 features Yasmin Alibhai-Brown compared to you Iain, or is it just that she seems to always be on there.

Caroline Flint has been moaning to the press all week about Webcameron. She's such a WHINGing Moaning Minnie!!!

This is further evidence of Labour's failure to get a grip with the internet, its possibilities and pitfalls.

Online journalists and commentators are now a fixture of the media. Ignore them at your peril!

I am not a Tory and hate paraphrasing Cameron, but I guess it just underlines the fact that the leadership of new Labour contiunues to be monochrome in a digital age.

Thanks "anonymous" for giving us the English-language website for Melissa Teuriau (http://www.melissa-theuriau.fr/en.html). She almost makes me want to be straight.

I thought you'd stopped Tim Ireland from posting on your blog, Iain...

Chris Paul, your conspiracy theories never end, do they? No I bloody didn't.

Anonymous, I have indeed banned him and have now deleted his comment.

When he finally leaves 10 Downing Street, the caption underneath Blair's name should read "ex-nazi fuhrer and spawn of Satan"

Labour's policy, viz-a-viz the BBC: Complain every day and if possible every hour. The content doesn't matter. Just make sure they are continually looking over their shoulder, and constantly asking themselves, "How is this going to go down with the government?"

The BBC's policy, viz-a-viz Labour: Please do complain if ever we depart, however slightly, from the party line. This enables us to say "We get complaints from across the political spectrum, so we must be getting the balance about right."


It's not a bad thing