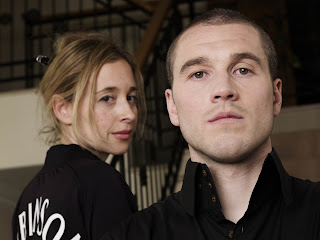 Noreena Hertz has spent the last 2-3 months touring football clubs trying to get as many players as possible to give a day's pay to maydayfornurses.com. Needless to say, West
Ham's entire squad coughed up - the only one I think to do so man for man. Needless to say the tightfisted gits at Wigan refused to contribute, bar one solitary member of their first team. Anyway, she's raised £750,000. Rumour has it that the party leaders are making time to see her personally about this.

There's an Early Day Motion (1422) which about 85 MPs have signed congratulating the Mayday For Nurses campaign on their efforts. Noreena Hertz has made a documentary for Channel 4 to be broadcast on 7 June about her tours round the football grounds of Britain.
Posted by Iain Dale at 2:54 pm

In what way, exactly?

So that excuses West Ham cheating and means the rules should not have been enforced ???

Is this so different from the Farepak(?) Christmas hamper situation, where individuals were being shamed into Charity?

Just because it's a populist cause doesn't make it right.

They did not cheat. The players were properly registered. get your facts straight before commenting on things you obviously know nothing about.

Obviously rules must be enforced. They infringed a rule on third party influence. An independent commission heard the evidence and fined West Ham, £5.5 million. They accepted their punishment. The Commission accepted, as did the FA and FIFA that both players had been registered properly and were eligible to play.

"Infringing a rule" is cheating.

And they have still not produced any evidence that the conract with the third party is not still valid. hence the Sheffield United legal challenge.

And all precedence (AFC Wimbledon, Middlesbrough, Swindon, Scarborough) shows that they should have been docked points so the rules have not been enforced - they have been sidestepped.

Why I agree with you Iain, I think this is a good idea, it really as to be asked why are the Government not helping out our nurses??

Fair play to the footballers for giving some of their money up, it is nice to see them helping out other people.

I blogged on it here a couple of weeks ago ( http://bucf.wordpress.com/2007/05/13/first-priority-it-better-be ) when Gordon Brown announced the NHS to be his number one priority, perhaps he should give nurses more money rather than relying on the kindness of footballers.

On a point of order Mr Blog Chairman:

What is the difference between "infringing the rules" and "cheating"?

And while we are about it, does the panel think that the hiring by Sheff Utd of 2 former Man Utd stars (Robson and Kidd) is simply a ploy by the Blades to enlist the support of other Premier League clubs (apart from Man Utd), who each have former Man Utd players as their respective managers: Reading, Blackburn, Sunderland and Birmingham? Plus Man Utd on the basis that they would then have 30 soft points a season playing those teams.

iain, spurs squad all did too.

Oh, you are sooo contraversial Iain. With Guido away I thought I'd take a tour of your blog. zzzzzzzzzzz.

What a great idea

I think i'll try a "mayday for Anonymous". obviously I don't want to be too unoriginal so i'll ask F1 drivers for their money instead of footballers.

Very harsh on Wigan players who are little doubting the poorest paid in the Premiership. And whatever you may say Iain the punishment for the CHEATING and LYING (admitted) was very lenient indeed, you should at least count your blessings. And possibly stand by for two extra games next season.

Reading you Tories sticking up for nurses pay - which is a step change away from 1997 prices albeit with more to do - would be amusing if it were not so incredibly hypocritical.

Wigan's players are contributing to the Fight to get Justice in Football campaign. Their main target is to get West Ham relegated
to Division 2.

Is that because of the obscene amount of money the West Ham players get compared to Wigan? And, let's face it, following the abuse the West Ham team have received recently they (a) have to make it up to the fans and (b) probably don't get out much for fear of reprisals so have lots of spare cash lying around the house.
Seriously, it's a good thing.
Seriously, though, it's a good thing and well done to 'em.

Why is it that some (almost always public service) workers moan so much about their pay. Specifically nurses, fireman, teachers.

If they want more money I suggest they do what the rest of us do and look for a different job or if their CV ain't up to scratch grin and bear it.

It's the supermartket and fast food workers that I feel sorry for - they are so visibly and obviously some of the hardest workers and yet get paid the least.

When did you donate a day's pay to the cause, Iain?

"only one to do so...man for man"
Oh Iain. I belive you mentioned above about getting facts straight.
Reading, Fulham, Watford.

Rather than "signing an early-day motion" which is rather pointless, why don't these freeloaders who claim to represent us at our expense (also known as Members of Parliament) who are supposed to hold to account those who are treating nurses so appallingly "donate a day's pay" themselves?

I wonder what Portsmouth players gave.

Off message I know but come on let's all sign up!

We the undersigned petition the Prime Minister to honour the former Prime Minister of the United Kingdom, the Baroness Thatcher of Kesteven, by naming a ship in Her Majesty's Royal Navy "HMS Iron Lady"

To get back on topic, I have some questions anout whether nurses are being treated as badly as is portrayed by this campaign - especially compared to some other groups.

Matt
Going away to do some pre-blog research.

Why are the party leaders making time to see her? Just because they have found some populist cause to join. If I were her, I would refuse any such meetings.

It's good that she's collecting money, but I don't think people should be shamed into donating. We already pay taxes after all, and in fact, footballers pay more than most. If people want to give, fine. If they don't, there should be no shame in that.

More shockingly, none of Chelsea's players have signed up.

Apparantly there will be a donation from the club, but given the amount those guys earn they could also have donated a day's wage each.

Footballers already pay a hundred or so days pay to be used for nurses pay via taxes. This is a pointless gimmick.

What precisely is the point of this? No doubt footballers will feel very pleased with themselves but what will those donations solve? Do nurses really not earn enough or do they leave in droves (if, indeed, they do leave in droves, which seems to depend on who you are listening to) because of the way their jobs and the whole of the NHS is structured? And, while we are at it, where is the money going and who is distributing it?

I have to admit that I know nothing about West Ham cheating, not cheating, infringing rules or whatever. I just feel another ridiculous and self-important event of this kind is not of any use to anyone.

Who knows what the Wigan footballers do with their cash? Stupid to comment that they are tightfisted.I did not give a penny to Tsunami Appeal - knew it would not be wisley spent. Who in their right mind would give money to NSPCC? This nurses appeal is more about raising political awareness - got fuckall to do with improving the lot of the average nurse.

Wow. Tory logic in all its gory glory.

Are those two statements linked in any way? If not, where is the West Ham appeal Iain? Was the £5.5million some sort of charitable donation? Is a word other than 'cheat' you'd like us to use? 'Cos it looks like cheating to me, perhaps fraud, deception or, here's a thought...sleaze.

Have you donated a days wages Iain?

I have serious questions about the way that maydayfornurses is being administered.

The word "nurses" is often used as shorthand for the whole team of people who care for you in hospital, everyone from paramedics, porters, cleaners, health care assistants, operating department practitioners, pharmacists, scientific staff, dieticians and all the staff that enable them to do their job. I don't have a problem with that, but Noreena Hertz has decided to ignore everyone else and just pick on one staff group. Not only that, but only registered nurses are allowed to claim for the hardship money, student nurses (who do really suffer hardship) get nothing.

From the maydayfornurses.com site, the following are given as reasons to give:

Student nurses should be able to afford rent. (agreed, but maydayfornurses have set up their fund to stop student nurses getting a penny)

Newly qualified nurses should be guaranteed work upon graduation. (makes sense, but you don't need £750,000 to campaign for that)

No one who chooses to spend their lives caring for others should find it impossible to live a decent life themselves as a consequence. (Maybe I've just spent too much time with workers earning close to the minimum wage to view nurses as poorly paid)

Considering over the same period inflation has been 10.8% to 19.7% depending on what inflation measure you prefer, nurses haven't done that badly. This year is the first one in 10 years that the unions haven't immediately accepted the pay deal, that should tell you something.

She looks remarkably like Andrea Herz, the Lib Dem journalist

Why did the Hammers ditch their (old) manager?

Because when it came to 'staying up' he was all over the place!

"none of Chelsea's players have signed up."

Judging by their WAGs they mostly prefer going to (or is it running after, Jose?) the dogs

Do footballers really pay that much tax? Surely they can afford good accountants.

It's the middle class earners who pay for the uber-state, not the rich.

Perhaps when nurses learn how to wash their hands they'll deserve our sympathy.

No I have not donated a day's pay. But then again I do not earn £20,000 a week like premiership footballers, do I?

So? They've paid their taxes on it - far more than they'll ever take from the NHS.

I thought you were a Thatcherite, Iain, but this smells strongly of the politics of envy to me.

Some programme on about this, on channel 4, now.

Absolutely stupid programme imo. Why in particular nurses, and why footballers?