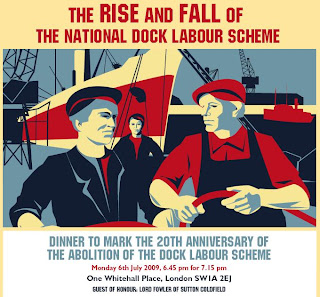 A few weeks ago I wrote about my part in the downfall of the Dock Labour Scheme, which the Thatcher government abolished in 1989. On July 6th, together with Nick Finney, my old boss at the British Ports Federation, I am helping to organise a dinner to mark the twentieth anniversary of the Royal Assent of the scheme's repeal. Norman Fowler, who was Employment Secretary at the time, will be the guest of honour. There will be a lot of old colleagues from the ports industry there too. If anyone would like to book a ticket for the dinner you can do so HERE.
Posted by Iain Dale at 5:23 pm

I'll bet that not many ex- and retired- dockers will book tickets. :-)