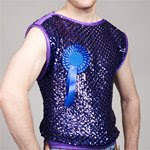 Two nights in a row at the theatre. There must be something in the water. Tonight I went to the opening night performance of TORY BOYZ, which is starting a four week run at the Soho Theatre.

I wanted to be able to write a glowing review, I really did. But I'd be telling an untruth if I said this was a production which I enjoyed. It wasn't that it bored me - it didn't. It was too fast paced for that. No, it irritated me because it played up to too many stereo-types and was just a bit too predictable.

The lead character is Sam, a twenty something gay lad from Manchester. He works in the office of the Shadow Schools Minister (coincidentally called Michael) alongside his slightly older chief of staff, Nick. Sam has given the come on to a Labour researcher but when it comes down to it, he can't go through with it. We are throughout led to believe that he suffers from the same inhibitions which Ted Heath suffered from.

Indeed, Ted Heath is the running theme of this play. We're given none too subtle hints that the former PM was gay -very close to his mother, you know. Cue the next stereo-type. Heath's former wannabe girlfriend meets him on Hampstead Heath "do you come here often," she asks him. "Once or twice," Heath responds, implying that it was his normal cruising ground. I think the producer has been reading too many of Brian Coleman's New Statesman columns.

Meanwhile, Sam takes a class in a local school and teaches the teenage kids about the political system. There are some tender and funny moments in these scenes, none more so than when the macho black kid of the class asks Sam if he is gay. Please don't make the kid come out I thought to myself as if having a premonition of a predictable outcome. I'll leave you to wonder if he did or not.

The play did wrestle with the problem of attitudes to homosexuality in the Tory Party. It wasn't an anti-Tory play at all. Indeed, it was very fair in its portrayal. But it lacked something. Sex. That may be an odd thing to say but bearing in mind the subject of the play, it was curious that the entire cast had the sex appeal of Dale Winton dressed in lycra. The Labour researcher who was trying to seduce Sam was, well, the most unconvincing predator I have ever seen. I doubt whether he had the audience's collective gaydar twitching very much - or anything else for that matter.

It has to be said that most of the people I spoke to at the after show party afterwards did not share my view of the play. With a couple of exceptions, they all found it moving and thought provoking. As usual I represent the vocal minority!

Interesting, Ted Heath: My grandmother - still alive at 87! has told me some intesting stuff about Ted Heath. She was staioned in WWII with a lady called Kay Raven - From what my grandmother said Heath was not gay; posibly bi-sexual given the later revelations. But in WWII he was concerned and in Love with someone called Kay Raven. Maybe he changed into a homosexual after the war but in the war he was certainly orientated toward women.

Is it not possible that the reason that The Heath never formed a relationship was that both men and women found him equally repellant?

His emetic personality defied, indeed transcended, the notion of sex.

I've said this before, but I make no apology for saying it again.

Just WTF were the Tory parliamentary cadre of 1965 (or whenever it was I can't be bothered to look it up) thinking of when they elected that fucking buffoon (sorry Iain, but it's the definately the mot juste) to the leadership of the Party?

Those stupid buggers have a good deal to answer for.

Hmmmm.....remember the Kincora Scandal....The names McGrath , Semple and Mains are widely known but it has become obvious that there are other names of powerful and well-known people who have connections with the Kincora saga and whose identities the so-called authorities have tried to keep secret since the scandal broke . One such person who has been reported to have visited Kincora is Ted Heath , the former Conservative MP and British PM.

"given the later revelations"

But it was a National Youth Theatre production... not sure how much "sex" they would have been allowed to inject.

"it was curious that the entire cast had the sex appeal of Dale Winton dressed in lycra."

Don't you know politics is showbiz for ugly people? ;)

A play about gay tories...how radical! Perhaps a play about straight young tory boys would be more radical given the current makeup of CF.

It's been said before but homosexuality leaves a bad taste in the mouth. KY anyone?

Everybody and his uncle gets linked to Kincora.

I do not have a pink pound so I won't be seeing Tory Boyz.

If Heath was a homosexual I would have thought there was money in it for someone to dish the 'dirt'. I await the Daily Mirror headline ...

I was at the performance last night also, even had the very brief pleasure of meeting you Mr Dale, and I have to say I agree.

I too went in hoping, wanting, the play to be good and tell all my friends to see it.

My companion to the play absolutely loved it, where as I felt it was lacking.

I was rushed through cliches that to be quite frank, irked me.

The acting too wasn't that great either. I have been to Soho Theatre before, seen productions with the NYT and they have been spellbinding, but this play just didn't hit any mark for me.

In fact the best acting all night was done by me in the Studio congratulating the cast on a 'great performance'.

The producer spoke to me before and said the best line to say to a writer if you don't like a production is 'Marvellous doesn't begin to express my thoughts on the play' - came in handy.

No, I think it was very apt that the opening line was 'bag of wa*k' (or something similar) as those were my first words to my companion afterwards.

ian dale. you are an idiot sir. shut up

I think it is unfair to slate an entire cast's performance yet say nothing of the writing, directing or set; evidently being an avid tory yourself it is quite a bias view.

Having watched the show last night it was clear that a lot of work has been put into the piece. It is not a topic that all will enjoy but once that was corectly approached nevertheless.

Maybe you were watching a different show as I thoroughly enjoyed it.

Get over yourself Iain Dale. Your a contradiction and a stereotype

this is a post too far into the dark side ,as Darth wouldn't say ....!

Most cricketers here don't bat fer the other side ,..... and find this sort of stuff ...somewhat leg before wicket ..(at a guess).. as dickie bird would infer .... and there's a man who knows it !

lycra and politics ....should only be kept to gorgeous George ...