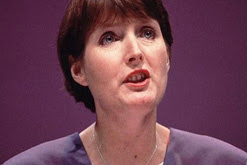 My cup runneth over. Harriet Harman has been elected Labour Party Deputy Leader. I do so hope Gordon Brown makes her Deputy Prime Minister. The sight of her ditching all the left wing positions she adopted during the last few weeks will be a joy to behold. It is, it has to be said, quite a remarkable political comeback from the woman who was sacked from Tony Blair's cabinet after a very short time for being completely incompetent. I do so look forward to her deputising for Gordon Brown at PMQs!

Sky News had a bit of egg on their faces this afternoon. They had been reporting for an hour that Alan Johnson had won and then just a few minutes before the result announcement their sources told them it was Harriet Harman. I don't know how News 24 were calling it but that's the peril of trying to get the story first, I suppose.
UPDATE: A reader alerts me to the fact that the Telegraph has had an Dewey moment HERE. I wonder how long the story will stay there.
Posted by Iain Dale at 2:38 pm

Bloody Hell.
Someone as shallow as Cameron

"really quite shagable"... Harman! Dear Lord, I know all the nice girls are Tories but really the Labour Party can offer better!

Did you see Prescott's face when she called him "larger than life"?

Hmmm. Harpic, bucket of warm piss, a match made in Manchester...

She’s gorgeous. I’m getting moist just watching her on News 24.

Get the telegraph.
Johnson elected.

There aren't any prominent Tory women though, are there?

Women do listen to women, not blindly vote for them, but women do like to hear womens voices and see women in positions of power and influence.

Bit of problem, whether you like it or not, I'd have thought.

Well thats guidos money over at betfair down the gary glitter.

News 24 managed to avoid Sky's embarassment by calling it for Harman, though before that they speculated much less than Sky did (which is probably they've avoided having egg on their face!).

You're only jealous Iain! Don't you wish that the Tories could just once have an internal election as free of bile, spite and shear nastiness as this one has been? One in which people vote for the candidates they like rather than against the candidate they can't stand the most...

Harman is one of the few remaining "dangerous but honest" socialists in the Labour party - the rest are just Blairites - toadying to whoever they need to to get into office.

In no other "democratic" country would a farce like this be played out.

Iain...I agree with you. Twice in two days, what's going on?

Right, down the pub to drown my sorrows.

What does it matter Iain, as Portillo points out in today's Sunday Times, the Tories are stuffed anyway: comments please!!

Wow, the choir is really funky!

Fantastic choice. Guaranteed to put her foot in it at every opportunity.

I never once understood her attraction to so many people - either physical or intellectual.

Had to laugh at her "I'll ensure the family is at the heart of the agenda" - the agenda will be whatever she's told it will be.

I wonder how long the story will stay there.

No, it’s definitely not an intellectual thing!

Well it could have been Cruddas I suppose, so things aren't as bad as they could have been. Seriously, what has Harriet Harman ever done to make anyone think that she has the talent for one of the very top jobs in British politics? Even her recent election campaign she seemed more concerned with stating and re-stating the fact that she was a woman rather than detailing her vision or qualifications. Brown won't be happy with her as an unsackable member of his top team.

Seriously, what has Harriet Harman ever done to make anyone think that she has the talent for one of the very top jobs in British politics?

Clearly enough to impress the Labour grassroots! Perhaps they were annoyed at not have a say on who got the top job - a bit like the rest of the electorate.

What has Harriet Harman ever done to make anyone think that she has the talent for one of the very top jobs in British politics?

Gordon Brown: “We were reborn under Neil Kinnock, John Smith, and Tony Blair.”

Hey, what about Michael Foot?

Mocking Cameron is no longer necessaary.
The seed has been firmly planted now that Cameron is a lightweight Old Etonian.
Making Cameron look flimsy intellectually will be jolly fun though.

If she was a man, would she have won?

anon 3.43: I don't know how well treatises on the cost of handbags sounds from the mouths of men.

I used to hear her, with growing disbelief, on the Today programme. She was seriously thick.

Good news for us Tories. Bad news for the nation. A stark illustration of the dearth of talent in the Commons.

No idea how to do a "screen dump" but imagine my confusion when I saw this page on Bloglines:

Harriet Harman, the justice minister, has been elected deputy leader of the Labour Party.

Alan Johnson, the Education Secretary, has been elected deputy leader of the Labour Party.

Considering Gordon's habit of being scarce when the faecal hits the fan, Harriet Harpoon is going to be like a beached whale on a regular basis.

However, it will be interesting to see how Hague handles it. He is a gent, so might find it hard to land punches if Harperson gets all flushed and wibbly.

Personally, I think he should club her mercilessly over the bonce like a Canadian to a doe-eyed seal cub.

This presumes that HH will be Deputy PM as well as LEADER. I suspect that Gordon will have someone else up his slieve...so all is not lost for Blears!!!!!!aaaaaaarrrrrrhhgghttt

This presumes that HH will be Deputy PM as well as LEADER.

He has hinted that he won't have a DPM at all - which is a smart move after "larger than life" Prezza!

Blears came last! Shows how much of the party is unremittingly New Labour!

You gotta love the news media!

Iain, it was probably the same idiot who worked for ITV in 1997 who reported Simon hughes had lost his seat.

Er -- because Sky News often claim to break news first by attributing their complete flyers to "Sky Sources" and getting them wrong. Like when they said there were five people trapped in that building that collapsed in Westminster the other day.

Little Miss prissy herself, Paulina head girl, and so committed to left wing causes that she busses her son into a neighbouring county to get him a selective education.

and ian - you recently slagged off Harriet for being shortlisted for the Public Affairs News politician of the year awards - perhaps an apology on your part for lack of political judgement would not be amiss - just goes to show - first you support davies for leader of the tories - and you get that wrong - and then you dismiss harman as a credible deputy leader of labour! is it any wonder that the tory party are in such a state.

I can foresee the gloating in the raddled old bag's column in the Grauniad tomorrow:

Isn't this the stupid woman who used to make a big song and dance of breast-feeding in public?

Perhaps, we should all call her "Bitty" from now on.

I shall post this on other blogs in the hope that it causes her grief.

actually it was the members of the party "who won it" - Harriet is not the Deputy by virtue of the union vote - but because the members voted for her.

Just goes to show - and a lesson for Cameron - never take your members for granted, you have to lead but not in a fundamentally different direction from your grassroots - Cameron does not get that - Brown and Harman do..

Will the Tories never learn?.. To describe Polly Toynbee as a "raddled old bag" and Harriet as "bitty" for campaigning for womens rights to breastfeed in public - says more about the true views of the average Tory, than any cuddly stuff from Dave cameron!!

You assume that I am a Tory, just because I mock this ghastly woman?

Now who's being judgmental? Aren't voters from other parties allowed to despise her just the same?

I think we can all work out who is the tit here!

Iain I have a picture and the full text of the Telegraphs Dewey moment on my blog if you are interested.

I WAS going to comment that at least she is better looking that the previous deputy oaf, but that lovely pic you put up has made me change my mind.

... but the real benefit of having the lovely Harriet is that no one can any longer refer to the deputy oaf as a "prick".

So, sicko and thicko.

I wonder what Frank Field thinks of her new role?

Wonder if she will be offering him a job any time soon :-)

As Body Snatcher Harman is so keen on having our deceased grandparents dug up and 'compacted', David Cameron should ask her why she hasn't had HER grandparents' remains violated in this manner.

Harriet .... I seem to remember Ken Clarke telling her she would be better off knitting socks for the troops.

Whatever happened to the sexy little chipmunk?

When the rump of the Labour Party and its hangers on gathered in Manchester to cheer Gordon Brown and Harriet Harman, what, exactly, were they cheering?

Brown believed everyone else in the room to be unfit to occupy what is now little more than the ceremonial position of Secretary of State for Northern Ireland, and he is still talking of non-Labour Ministers, who, since they cannot now be Lib Dems, must be Tories. He could have kept Britain out of the Iraq War, simply by instructing his backbench followers to vote against it; the same is true of many, many other things. He is an enthusiastic supporter of the “renewal” of Trident. And he spent much of the last few days successfully demanding that the French destroy their workers’ jobs and their public services by signing up to neoliberal economics.

As for Harman, she was the nominee of Gisela “Vote Bush” Stuart and of Denis “Vote Sarkozy” MacShane, identifying her as a member of the separate party that trades under the names of the Euston Manifesto Group, The Henry Jackson Society, and The Orange Book, among others. Those of its members who trade under the name of The Orange Book, Brown wished, and wishes, to bring into government. Those who trade under the name of The Henry Jackson Society, he undoubtedly will bring into government.

And Harman, with Patricia Hewitt, ran the old National Council for Civil Liberties when it was hand in glove with the old Paedophile Information Exchange. That powder has been kept dry up to now. It is being lit tonight...

At last we have, in the Counteses neice, a Labour lady in the top circle who can dine with the Bullingdon Berties like Cameron without feeeling inferior. I am sure she will keep counsel in the privies well! Possibly even throw him a line or two?