25 (More) Random Things About Me

1. When I was 9 I stuck a pitchfork through my big toe.
2. My Saturday job was mucking out my Dad's pigs. I was paid 10p per hour.
3. At primary school my friend threw a lump of plasticine at me from the other side of the classroom. It went straight into my mouth.
4. If I could buy a 20 tog duvet, I would. I like to sleep under two duvets.
5. I have blogged from the Oval Office.
6. Quite unbelievably I have done fashion shoots for both GQ and Esquire.
7. I once compered a wrestling match.
8. I once grew a beard, but it was a bit ginger, so had to come off.
9. I was once interviewed by Giggle the guinea pig for the Sheringham Independent.

10. The first time I ever got drunk, I downed 11 pernod & blacks in two hours in a Norwich nightclub.
11. I have never tried any illegal drug.
12. I once won a pig playing bowls.
13. On my first visit to America in 1987 I insisted on visiting Southfork ranch. I now wish to go to Dollywood.
14. The best hotel I ever stayed in was the Serena Hotel in Kigali, Rwanda.
15. The worst hotel I ever stayed in was a guest house in Blackpool. The bed had rubber sheets.
16. The first speeding ticket I ever got was in South Dakota.
17. I once had blonde streaks in my hair. It was a mistake. 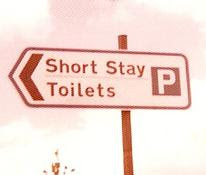 18. I appeared on the Multi Coloured Swap Shop in 1978 with a photo of a funny road sign in Cambridge which said SHORT STAY - TOILETS - P.
19. The only time I have sung in public was when I played one of Mack the Knife's henchmen in Brecht's Die Drei Groschenoper and had to sing Soldaten Wohnen. Not pretty.
20. I once got hit by several eggs which had been meant for Cecil Parkinson.
21. I failed biology O Level and got ungraded in Physics.
22. I owned an Audi Cabriolet formerly owned by Princess Diana. I sold it a year too early, if you get my drift.
23. In 1994 I took my father to visit the Normandy war cemeteries. I found a grave with my name on it.
24. On local election day 1985, the day before my finals, I knocked a Labour voting motorcyclist off his bike while driving three Tory voting old ladies to the polling station.
25. I was stopped for speeding in North Norfolk on the night of my selection as candidate. I was, ahem, let off with a warning.
Posted by Iain Dale at 8:00 am

So, numerous speeding tickets, you knocked a motorcyclist off his vehicle and yesterday you pranged your car... Remind me never to accept a lift from you.

"21. I failed biology O Level and got ungraded in Physics."

I'd keep quiet on the AGW debate, then.

"I once grew a beard, but it was a bit ginger, so had to come off."

If you worked at the BBC you'd be sacked by now.

"20. I once got hit by several eggs which had been meant for Cecil Parkinson."

"I have never tried any illegal drug"

But cannabis has been decriminalised....

I wouldn't have admitted to the blonde streaks - how does Minister for sill hair sound Iain?.

Blackpool - rubber sheets? they must have heard about your Moscow performance.

I've got ginger beard issues too - never been ginger in my life but... I just don't understand it.

Well done for falling in front of poor Cecil and "taking the egg" for him Iain. Shows Tory dedication well above and beyond. I hope Cecil appreciated it, but he may have been too distracted by thoughts of the ladies.

Bit surprised to hear that you didn't at some point hurl yourself across a puddle for Mistress Grantham - is that in a forthcoming "25 random things"?

25. It's a disgrace. Soft on crime. A criminal caught red-handed and the police just let him go. You couldn't make it up.

"The bed had rubber sheets."

How do I get on this Twitter thing?
I'm just dying to report that I looked out of the window and it's raining. And tonight we've got a ham for dinner.
I don't know how to do facebook either. I'd love to tell the world about 25 things that have happened to me. Especially I'd like my brother-in-law to read it, to pay back the mind-numbing times when we had to see all three hundred of his holiday snaps.

when did you blog from the Oval Office?

Draper will out you as a Gingerist now.

Was the police officer wearing pink stilettos and had a mustache by any chance ?

How did they get the pig to play bowls?

You evade the really important issues...like did you ever possess a gollywog?

I really did forget what I was going to write

You evade the really important issues...like did you ever possess a gollywog?

I am shocked and appalled.

24. On local election day 1985, the day before my finals, I knocked a Labour voting motorcyclist off his bike while driving three Tory voting old ladies to the polling station.


Four people on a motorcycle!
Quite common in some third world countries, but very unusual in the UK. Mind you it was good of him to offer to take Tory voters to the polling station being a Labour supporter and all.

Being an old lag on this blog, I remember you mentioning many of them. They are part of life's rich tapestry, the warp and woof of this mortal coil.

I was once in the back of a jaguar car.

That, in itself is not a big boast.

What was unusual is that Prince Michael of Kent was driving me.

What is even more unusual is that he deliberately drove the jag into the back of an articulated lorry.

"I once won a pig playing bowls".

I bet you cheated or the pig did not know the rules.

Quite frankly Iain, I am shocked, outraged and appalled.

It's all out now: you're (at least semi) ginger! How long till you join the Lib Dems?

Some people pay a lot of money to go to places with rubber sheets, or so I am given to understand. Perhaps you shouldn't be so quick to judge.

Like Stephen I think you should be careful describing things as "a bit ginger", Nanny (or Jo Brand) might be listening.