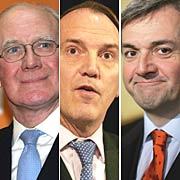 I'll do a running commentary on the LibDem leadership Question Time...

Question 2 on judgement. Hughes apologises for the way he handled his 'outing'. Impressive but perhaps a little pleading at the end. Ming staesmanlike but can't help feeling he is just, well, boring. Hostile questioning so far. Hughes takes charge on Oaten. Does Simon Hughes' hair look, er, well, just that little bit coloured? WIN FOR HUGHES

Question 3. How can Britain withdraw from Iraq? Hughes says troups should withdraw ideally by the end of the year. Ming waffles. He really has had the makeup slapped on. Just noticed what odd teeth he has. Huhne overdoing the hand gestures, which he is using to liven up his slightly soporiphic voice. Wants to set a deadline for a handover. Ming attackes Huhne for likening Iraq to 'business'. Campbell doesn't want to set a deadline. Says you have to approach it looking at the reality. Setting a deadline is artificial. Huhne interrupts to say we are already withdrawing troups. If we don't set a date it's prevarication. Uses Cook and Hurd as people who agreed to set a date. Ming's argument is correct but Huhne hits back well. He later says we are part of the problem, not the solution. We do not have an honest broker status. Ming's arguments will score with non LibDem members, but it's they who are his electorate. SCORE DRAW

Question 4. How do we achieve a better distribution of national wealth? Huhne starts talking about environmental taxes. Says rich should be taxed more. Bit of banter about where the 50% bracket should be. Got interrupted by the phone, so won't score this one!

Question 5. Hung Parliament. Ming says wants to banish the words from the LibDem lexicon. Wants maximum votes, maximum seats. Dimbleby floors him with an old quote where he uses the words hung and parliament. Ming really is all over the place on this. Hughes rules out coalitions unless there is PR. Says would cooperate on individual issues. Hune being eclipsed by the other two overall. NARROW WIN FOR HUGHES

Question 6. How much Parliamentary experience does a leader need? Huhne up first. Cites his European credentials and business acumen. Warm applause from the audience. Hughes cites Thatcher as the reason he should be trusted. Weird logic. Huhne bites back saying he was asking questions of people long before Hughes. Yawn. Ming says his experience has given him judgement and the understanding of how Parliament works. Dimbleby accuses Ming of sounding as if he is a member of an exclusive club, which Huhne doesn't yet belong to. Huhne again letting Ming and Hughes dominate. They go back to the hung parliament question. Again Ming flounders. Huhne for once picks up the baton and scores a hit. NARROW WIN HUHNE.

Question 7. Biggest mistake in politics? Huhne tells some tired anecdote about insulting a German trade unionist. Ming says his biggest mistake was to believe that rational argument would prevail. Simon Hughes cites lack of core statement of values at the last election as his biggest mistake. God, how weak. SCORE LOSS FOR THEM ALL!

CONCLUSION: Overall a win for Simon Hughes, who kept his struggling campaign afloat. Huhne wasn't as impressive as I thought he would be. Ming Campbell was frankly all over the place.
Posted by Iain Dale at 10:46 pm

They all seem very underwhelming to me to be honest. Mr Dale, I caught you on PMQs on Sky News and I thought you bore a passing resemblance to Martin Stanford from the same channel.

Don't bank on that. If the YouGov poll has any validity, the LDs are more conservative than you think. Hughes is appealing to a traditionalist side of the LDs that is a decreasing minority - I don't think he understands the mood of the party. Hughes is looking nervous as hell and desperate to play catch-up. Huhne looks confident and animated. He's doing well.

Martin Stanford? I'm much better looking! (storms off in a huff)

Just a passing resemblance (I hope I didn't cause offence!) Also, the other chap that was on with you seemed to have defective gyroscope such was the odd body angle he maintained throughout the proceedings.

Hughes caught lying was good. Bore draw. Ming to win. Off down the bookies now...

I don't agree, Iain. Huhne was animated and engaging, Hughes was adequate in playing off the back foot and Campbell was similarly adequate in his statesmanlike behaviour. I'd actually call it slightly for Huhne - he's advanced his campaign tonight. Hughes might have recovered a little and Campbell did no more than stand still.

Can't believe they have just won the by-election

I'd give it aa a win for Huhne his superior dentistry and not lying making all the difference.

I thought Huhne was the only one with balls.

Party leaders need balls . I felt that Ming and Simon were old school , tired politicians who were going through the motions.

Huhne won it by a country mile.

I noticed that the most interesting question - the one about Lib Dem support for regional assemblies - was quickly given the brush off by Dimblebum in line with BBC policy.

It's going to be Huhne: youngest (beats Ming) and cleanest (beats Hughes).

Hoe do you feel it compared to any significant signals given off by the Davis-Cameron Question Time? Different electorates, different expectations, perhaps, sure...
But as far as Huhne's concerned, perhaps his stealth campaign doesn't really factor in this one-off TV dust-up as a be-all-and-end-all factor anyway, certainly not so much as over-eager Simon Hughes...

I think here you'd say that probably Hughes and Huhne will both walk away comfortable but tonight would have hurt Sir Menzies who looked weary, frustrated and a tad grumpy. If nothing else I think Huhne staked a good claim to a number of second choice positions, even if he came off second. Good write-up Iain - is this going to become the regular pattern for writing up QT reports because if so I feel it works very well indeed.

A very fair analysis Iain, perhaps because there were no Tories on the panel ;-)

The fact that Hughes came over as marginally the most impressive of the three does not make the leadership issue any clearer, as he is generally supposed to be in third place. Huhne was not as impressive as I expected/hoped he would be either and too often allowed himself to be overshadowed by the other two. The quip about hisn "front-runner" status was also spectacularly ill-judged and was predictably squashed by Campbell. I suppose his only consolation was that most of the audience would have gone to bed by then. As for Campbell himself, he simply came over to me like someone from a previous political generation. He just didn't seem to connect with the audience somehow.

My overall conclusion was that, to answer the first questioner: yes, Charles Kennedy would have wiped the floor with this lot.

Excellent write-up, Iain. Thank you for saving me the trouble of watching the actual programme.

In the Tory equivalent, DD won over DC - not by a clear knock-out, but definitely on points. DC, of course, went on to win the members' vote by "a country mile", because that election didn't turn on policy detail but on which candidate looked more like an election winner. I don't know the Lib Dems well enough (thank God) to know if they would react the same way. It's not clear from your report which of the candidates satisfies that test, unless your point is that none of them is clearly ahead of the others?

The real significance of the Tory Election QT was that, because of the way in which the whole contest was staged, it was an excellent advertisement for the Tory Party. I don't get the impression that this applies to the Lib Dems....

I scored it completely differently. Huhne dropped the ball rather badly on Iraq giving Campbell an easy slap-down (Huhne said words to the effect that you set a withdrawal deadline coz its just like being in business - please!) He also blundered on inheritance tax and was very clumsy introducing the YouGov poll. Campbell looked assured and again reassured that there is more to him than foreign policy. Hughes looked like the slightly wild-eyed outsider he always has - I rather like him but not as a leader.

"The fact that Hughes came over as marginally the most impressive of the three does not make the leadership issue any clearer' YES well said. Just how accurate are the polls?

"Charles Kennedy would have wiped the floor with this lot" YES! YES! However, that's all done now. I still feel that Hughes will win, but no one knows those pesky 2nd preference votes will add up.