EU Constitution to be Reintroduced 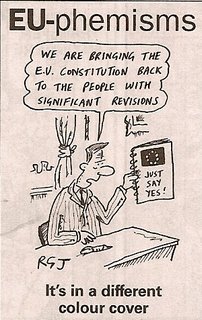 From Private Eye
Posted by Iain Dale at 10:23 am

This is a worrying prospect. Well for those of us who are concerned about freedom and democracy.

I posted this earlier this week

Cranmer has been prophesying this for half a year, not least because
Germany and France met months ago to agree a bilateral approach, mainly because Chriac had declared that the French 'non' was 'un accident', and insisted that the project must be kept on track.

And the German Chancellor has been invoking God and the Pope for its salvation.

With all this, the EU Constitution is 'inevitable', not least because it is the 'Divine will'...

Ah, a sighting of Cranmer. So this is where he has been hiding.

Give us this day a referendum.....

Dave said no constitution without a referendum.

The EU's like a nest of cockroaches. Even when you spray them, they keep going. Someone told me that even if you chop their heads off, they can keep running.

Perdix-didn't Dave also say he was pulling out of EPP?
Words are cheap!

Jeremy, there's a errant space in your link.

re: Verity and EU cockroaches . .

Perhaps more like bloodsucking vampires? Stakes and silver bullets at dawn, anyone?

Politikonzoon - No. I wrote "cockroaches" because I meant cockroaches. They plod on even after they've been killed. They are the only living thing that will still be functioning after a nuclear holocaust.

They are also extremely revolting. The very large ones that fly are even worse because they intentionally fly at you.

The British people should have been givwn a referendum on closer EU integration - especially when Thatcher signed the Single European Act and when John Major signed Maastricht. Still the Tories like to play the Eurosceptic cards and then ignore the British people.

I think there are a lot of things wrong with the EU along with many positive aspects. However with any institution, be it EU, UN, Westminster or a local council - there are plenty of issues and deficits in democracy which need changing.

The labout bastards promised a referendum on the LAST one. It was an embarrassment when they learned people didn't intend to accept it at all, and after the 2 "No"votes they were delighted they didn't have to fight the "Yes" campaign. As Mad Tony wants to be a commissioner to pay for his house when he leaves, nulayber will withdraw the referendum promise, claiming it was only for the last version of the constitution, and the new version has now been so revised it poses no need to consult the people.

Cameron is a busted flush on this; UKIP will get all the votes at the next election unless he promises to block the damn thing.

None of which matters, because the Bastards in Brussels have been quietly introducing bits of the constitution anyway. They have no intention whatever of allowing the people of Europe a say on the Evil Empire.